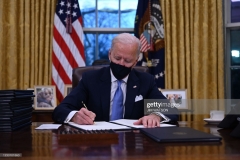 In one of his first official acts in office last week, Pres. Joe Biden signed an executive order dictating that the U.S. will rejoin the Paris Climate Accord – but, a majority of U.S. likely voters from across the employment spectrum say the move will cost American jobs and force them to pay more for utilities.

“The decision for @POTUS to re-join the Paris Climate Agreement will cost American jobs and force households and small business to pay higher utility bills.”

Omitting any reference to Biden (@POTUS) and Blackburn, Rasmussen asked likely voters if they agreed or disagreed with the prediction.

Majorities of government (52%), private company (52%) and retired workers (53%) all said that rejoining the Paris Climate Accord will cause Americans to lose jobs and pay more for utilities, as do 58% of those who are self-employed (“entrepreneurs”). Among those employed in some other capacity, more say they agreed (47%) than disagree (35%) that rejoining the accord will be harmful.

Regardless of age, gender or race, voters were more likely to agree than disagree with Rep. Blackburn’s warning.

The only groups with more respondents who disagreed than agreed that rejoining the accord will result in job loss and higher utility costs were: