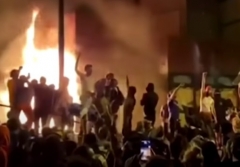 Twenty-nine percent (29%) of all U.S. likely voters say the government should allow “violent racial protests in some cities, including attacks on historical monuments” – but, half (50%) of self-described liberals say the violence should be permitted, a new national Rasmussen poll shows.

“Should the government stop these violent protests or allow them to continue?”

While 57% of all voters said “The government should stop these violent protests,” another 14% said they weren’t sure and 29% said the violence should be permitted.

But, 70% of liberals said either that the violent protests should be allowed (50%) or that they were “not sure” (20%) what the government should do.

By race, 41% of Blacks, 25% of Whites and 35% of “Other” said the government should allow the violence and destruction to continue.

Likewise, while 56% of all voters said the government should “criminally prosecute those who have damaged or destroyed historical monuments,” 58% of liberals said “No,” they should not be prosecuted. Thirty-two percent (32%) of all likely voters said they don’t think those who vandalize monuments should be punished, with another 11% saying they’re “not sure.”

Again, results varied by race, with 57% of Blacks, 26% of Whites, and 42% of “Other” races saying that monument vandals should not be prosecuted.

Regardless of their views on whether or not violent, destructive racial protests should be permitted or punished, a majority (56%) of all U.S. likely voters said the government’s response has been “poor,” including:

“How would you rate the government's response to the violent racial protests in some cities, including attacks on historical monuments?”