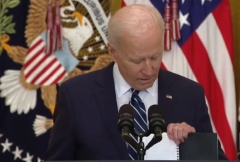 “Guess who supported the idea to let states overturn Roe v. Wade in 1981? Joe Biden,” Rep. Jim Jordan (R-Ohio) tweeted Tuesday, reminding Americans that Pres. Biden once voted for the very thing that he fears the Supreme Court will now do.

In a statement issued on Tuesday, commenting on the leak of a draft Supreme Court document signaling the court was prepared to overturn Roe v. Wade, leaving the issue of abortion legality up to the states, Pres. Biden states that is his administration has “argued strongly before the Court” in opposition to the anticipated ruling:

“[M]y administration argued strongly before the Court in defense of Roe v. Wade. We said that Roe is based on “a long line of precedent recognizing ‘the Fourteenth Amendment’s concept of personal liberty’… against government interference with intensely personal decisions.” I believe that a woman’s right to choose is fundamental, Roe has been the law of the land for almost fifty years, and basic fairness and the stability of our law demand that it not be overturned.”

But, as multiple news outlets have reported, in 1981, as a Democrat Delaware senator, Biden voted for a constitutional amendment that – like the overturn of Roe v. Wade the Supreme Court is currently considering – would have enabled each state to pass a law regarding the legality, restriction or prohibition of abortion.

“The amendment — which the National Abortion Rights Action League called ‘the most devastating attack yet on abortion rights‘ — cleared a key hurdle in the Senate Judiciary Committee in March 1982. Support came not only from Republicans but from a 39-year-old, second-term Democrat: Joseph R. Biden Jr.

“‘I’m probably a victim, or a product, however you want to phrase it, of my background,‘ Mr. Biden, a Roman Catholic, said at the time. The decision, he said, was ‘the single most difficult vote I’ve cast as a U.S. senator.‘”

That same year, in an article titled “Where 2020 Democrats stand on abortion,” PBS also reported on Biden’s vote in support of the constitutional amendment, which would have turned the issue of abortion over to each state:

“And while Biden later became a staunch defender of Roe, in addition to consistently opposing federal funding of abortions, he did vote in 1981 for a failed constitutional amendment allowing states to overturn Roe. At the time, he called it ‘the single most difficult vote I’ve cast as a U.S. senator.’”

“NPR News reported that Biden was ‘one of just two Democratic senators from the Northeast to vote to end federal funding for abortion for victims of rape and incest,’” Dr. Albert Mohler, a theologian and ordained minister who serves as president of The Southern Baptist Theological Seminary, writes in his commentary “A Profile of Moral Collapse: President Biden, Abortion and the Culture of Death.”

After the constitutional amendment Biden voted for failed to make it to the Senate floor in 1981, Biden voted against it the following year.