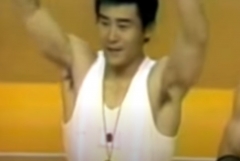 A Japanese gymnast at the 1976 Olympics chose to continue to compete even though he had shattered his knee during the opening floor exercises, helping his team to win the Gold medal by a mere four-tenths of a point.

Despite the pain, Japanese gymnast Shun Fujimoto decided keep his injury a secret and to perform in both the pommel horse and ring exercises, both of which are scored, in part, on the quality of the gymnast’s dismount.

In his rings routine, Fujimoto knew he would have to perform a twisting double somersault and land on his injured knee, falling from a height of nearly eight feet above the floor. Fujimoto fought his way through the excruciating pain of his landing and managed to remain upright, earning a personal-best score of 9.7 and helping Japan narrowly win its fifth straight Olympic Gold Medal in gymnastics.

Having further injured his leg in the landing, Fujimoto limped back to the sideline and collapse in a chair, where his was attended to by team doctors, who ordered him to retire from the competition.

“Although I was injured, I had to do it anyway, for me and for the team,” Fujimoto said years later, looking back at the experience. “I did not think of failing on the rings. The pain was unexplainable,” but “I wasn’t thinking, ‘What have I done?’” he recalled.

Fujimoto’s teammates had to help him onto the stage for the awards ceremony, where he says, “I started crying, because I had a responsibility for all of us; we cried together.”

“I wanted to challenge myself as far as I could go. Also, I wanted to continue our gymnastic success. So, all I did was focus on competing. Therefore, I didn’t do anything special,” Fujimoto said.