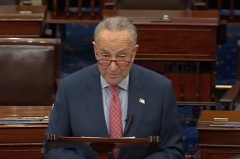 Senate Democratic Leader Chuck Schumer (D.-N.Y.) went down to the Senate floor on Sept. 29, one day before the end of fiscal 2021, when the federal government ran a deficit of $2.77 trillion, and attacked Senate Republicans for the “stupidity” they exhibited by criticizing the Democrats’ move to increase the debt limit.

Now on debt limit, now, of course, once we fund the government, we still need to address the urgent matter of extending the debt ceiling and preserving the full faith and credit of the United States,” said Schumer.

“To paraphrase the economist Austan Goolsbee, who just met with our caucus this morning, throughout history, there have certainly been governments that have defaulted on their debt, but never has there been a default caused by pure stupidity--in this case, Republican stupidity,” said Schumer.

Here is the full transcript of Schumer floor speech on the matter:

Senate Democratic Leader Chuck Schumer: “Now on debt limit, now, of course, once we fund the government, we still need to address the urgent matter of extending the debt ceiling and preserving the full faith and credit of the United States.

“To paraphrase the economist Austan Goolsbee, who just met with our caucus this morning, throughout history, there have certainly been governments that have defaulted on their debt, but never has there been a default caused by pure stupidity--in this case, Republican stupidity.

“Well, Democrats are working to prevent such an outcome from happening now. Over the past week, our caucus has tried to find a workable solution to avoid default on our sovereign debt, but the Republicans have stymied us at every opportunity.

“On Monday, we considered a continuing resolution which, among other things, would have extended the debt ceiling until the end of 2022, allowing us to pay for the debt incurred by the previous administration. Republicans unanimously voted in favor of default.

“So, on Tuesday, we gave Republicans another chance. We offered to solve the debt ceiling impasse by doing exactly what Republicans claimed they wanted all along: Raise it with only Democratic votes. We gave them a chance to oppose it, like they said they would, and allow Democrats to solve this problem ourselves. Again, it was precisely what they asked for. And Leader McConnell cited this precedent several times in the last few days as to how to get out of the debt crisis. But once again, Republicans blocked that proposal in favor of default, and, quite frankly, no Republican provided a good answer as to why.

“When Leader McConnell came out to rebut, he didn't discuss the merits of our proposal. He said: We don't want Democrats going forward and doing other things.

"Well, this is about debt that we have already incurred, debts from the past, spending from the past. It is not about the future.

“If we never did debt ceiling--if we always let the debt ceiling lapse because one party or the other didn't like some future action that the other party would take, we would never do it. It is an absurd argument--an absurd argument--because they have no real arguments because we were doing exactly--exactly--what Republicans have asked for: Pass it with your own votes.

“Time is short. The danger is real. Yesterday, the Treasury Secretary wrote that if the debt ceiling is not addressed by October 18, the government could enter a catastrophic default--catastrophic--for the first time in history.

“Secretary Yellen's warning was unmistakable. A default would be ‘disastrous for the American economy, global financial market and millions of families and workers whose financial security would be jeopardized by a delay in payments.’

“Yet, every day, the outcome grows more and more likely because of Republican intransigence, because Republicans are deliberately preventing the government from being able to pay its bills.

“Now, in solving this crisis, this body cannot and will not go through a drawn-out, unpredictable process sought by the minority leader. It risks the full faith and credit of the United States. To do this through reconciliation requires ping-ponging separate bills back from the Senate and the House. It is unchartered waters. Individual Senators could move to delay and delay and delay. It is very risky and could well lead us to default, even if only one Senator wanted that to happen. That is very possible. So you can't do it this route. Everyone who has studied it knows it is risky, and it is simply a political gambit by Leader McConnell, who has changed his tune several different times. He said over and over again: Just you Democrats vote for it. We give them that chance. Now, he has backed off that and moved into this untenable excuse. It is not a real answer.

“If the Republicans really want to prevent a default like they claim they do, they should step aside and let Democrats do the responsible thing. As default gets closer and closer to becoming a reality, our Republican colleagues will be forced to ask themselves how long they are going to keep playing political games while the economic stability of our country is at risk. At stake is the well-being of millions of Americans who did not ask for any of this and would suffer immensely because of Republican obstruction. If Republicans choose to keep making this harder, if Republicans choose to drag out this process, they will own the consequences of their default.”