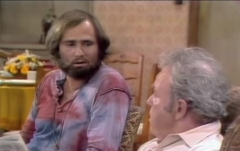 Rob Reiner, who played the son-in-law of Archie Bunker on “All in the Family,” sent out a pair of tweets last week expressing his dismay with former President Donald Trump.

“It’s time to stop comparing Trump to Hitler,” Reiner said in a tweet last Thursday. “Trump is his own unique brand of Criminal Sociopath.”

“We have to keep saying this: Donald Trump led a deadly attack to overthrow the United States Government,” Reiner said in a tweet on Friday.

“To preserve Democracy, he must be held accountable,” Reiner said.