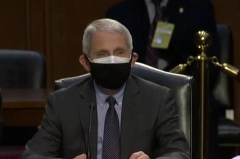 (CNSNews.com) - When he testified on Thursday before the Senate Health, Education, Labor and Pensions Committee, Dr. Anthony Fauci, the director of the National Institute of Allergy and Infectious Diseases, started out conspicuously wearing two masks—a black one over a white one. 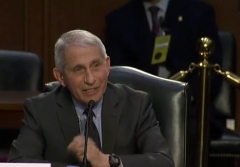 After this initial presentation, 29 minutes into the hearing, Fauci put both masks back on, according to the CSPAN video of the hearing.

As the hearing approached its 57th minute, and Sen. Tammy Baldwin (D.-Wisc.) was asking questions, the CSPAN video showed that Dr. Fauci was now wearing only one mask—the white one that had originally laid under his black mask. 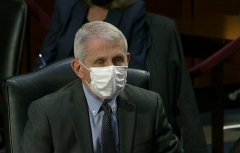 For the remainder of the hearing, Dr. Fauci generally would remove this one mask, or push it down around his neck, when he was speaking and then place this one mask back over his face when he was done speaking.

However, at one point when he was answering a question from Sen. Jacky Rosen (D.-Nev.) he wore the mask while speaking. 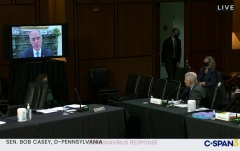 By contrast, at 1:51:42 on the CSPAN video, the camera panned to Dr. Fauci while Sen. Bob Casey (D.-Pa.) was asking him a question. At that point, Dr. Fauci had his mask off when Casey was speaking and sat patiently and unmasked at the witness table for Casey to stop talking so that he could start.

In one of his responses to Casey, Fauci said: “There are a couple of things that concern me. Probably the one that is the most prominent is my concern that we will declare victory prematurely.”

Dr. Fauci did not return to wearing two masks as the hearing proceeded.