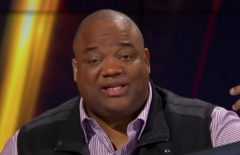 Sports journalist Jason Whitlock said that if the NFL plans to play a “black national anthem” before games in Week 1, it is “cowardice at the highest level.”

Whitlock made his remarks on the July 6 edition of FNC’s Tucker Carlson Tonight. There have been numerous news reports, citing an unnamed NFL source, that the league is planning to play  “Lift Ev’ry Voice And Sing,” commonly known as the black national anthem, at the Week 1 games.

After this black national anthem is played, the real National Anthem (Star Spangled Banner) will be played.

On the program, Whitlock said, “This is a historic failure of men and leadership. This is cowardice at its highest level. This is the NFL jumping the shark and saying we’ve quit being who we said we are. We’re now something else, because our money’s on the line, and we don’t stand for the values we said we stood for.”

Whitlock further criticized the NFL for going against the values they are founded upon.

Whitlock said that if the NFL starts out its season with everyone standing and singing for the black national anthem, while virtually everyone on the field takes a knee for the Star-Spangled Banner, “The NFL will run off a nice fat chunk of its audience, and will never be seen the same again, because of the failure of leadership throughout the NFL.”

Whitlock also described Black Lives Matter as Marxist, which is obvious from its website.

Jason Whitlock is a sports writer, and former host of Fox Sports 1’s Speak for Yourself. He currently is a writer and partner at Outkick.com.