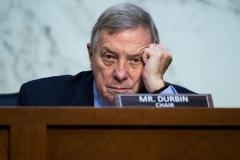 (CNSNews.com) - Senate Majority Whip Dick Durban says he supports the $3.5-trillion reconciliation bill that has caused a split in the Democrat Party. Leftist Democrats insist that the bill -- full of new entitlement programs -- must pass either before or along with a smaller bipartisan infrastructure bill.

But Durbin told CNN's "State of the Union" he's a "realist" about what can be accomplished, and he acknowledged, "concessions will be made."

Well, Dana, let me tell you at the outset I support the $3.5 trillion. I believe that the elements of it have been stated over and over again. They're good for this country, and they're needed by families and by our nation.

But I'm a realist too. I went through the Affordable Care Act. And you remember that debate 10 or 11 years ago, where we made concessions. And I think those concessions will lead to a different number.

I just want to make sure that we come up with the right result, not the biggest number, but the most effective number to help families and this economy move forward in a responsible way.

Durbin said he doesn't know what the re-negotiated bill will cost:

"I can't tell you how many times I have been asked, what's your number? I can tell you, as whip, working with Chuck Schumer, we sit down, we look at the priorities, we listen very carefully to every single member. Every vote counts when it comes to getting to this majority.

"And concessions will be made. And we're certain of that."

Host Dana Bash asked Durbin if some programs should be eliminated or if they should all be scaled back but kept in the bill:

And it's one that we're going to face in next four weeks, because October 31 is our new target date, certainly to get the debt ceiling done long before that, but also when it comes to this issue, reconciliation and the infrastructure bill, to have that as our target.

And we have to ask that very fundamental question. Should we do everything to a limited degree, or should we really invest ourselves in the most important things and try to make that decision? It's a hard one.

Bash asked Durbin, "As somebody who supports the $3.5 trillion, the full thing, what do you think should be done?"

I think the American people are looking for us to come up with effective ways to help them in their daily lives, working families, for example.

So, we want a work force that's responsive and building the economy. We have got to give mothers and fathers the confidence that where they're leaving their children is safe.

Durbin refused to list what programs could be moved into other legislation:

"Well, there are some -- I'm not going to go through a list of them. But there are some that can be, I guess, scheduled in a different way as to when they go into effect."

Durbin said he's listening to Sens. Kyrsten Sinema and Joe Manchin...every single day and deciding, what will it take to bring them across the finish line? We absolutely need them."

Sinema and Manchin oppose the $3.5 trillion bill in its current configuration. Without those two Democrat votes, the bill cannot pass, since all Republicans are firmly opposed.