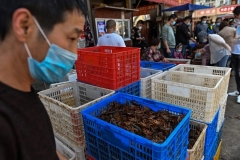 But Democrats bristle when President Trump blames China for failing to share information about the virus's human-to-human transmission, a warning that could have saved American lives as well as people all over the world.

“The world is paying a very big price for that they did,” Trump told a White House news conference on March 19. “It could have been stopped right where it came from, China.”

House Minority Leader Kevin McCarthy (R-Calif.) on Tuesday night wondered how someone who represents hard-hit New York could say something like that:

"There is no greater state that should realize what China has done to their own citizens, his own constituents," McCarthy said.

"How many people have died because of what China did? You know what, President Trump has warned us about China, he took action. While the World Health Organization told us that you could not get it from human to human, the president shut down the flights from China coming in. The Democrats attacked him for that. A month later, almost, you had Nancy Pelosi telling everybody to come together."

McCarthy is backing Republican legislation that would "incentivize" American investors to bring critical pharmaceutical and medical supply chains back to the United States.

"Well, we have to bring them back home," McCarthy told Fox News's Laura Ingraham:

"The number one thing you find is that we don't make aspirin, we don't make penicillin. This is what China has done...Their plan to overtake, going into our universities, going into our press. They have gone in to take the critical minerals away. They have gone in to find those in the pharmaceuticals -- they control 70 percent of the ingredients that go into generics and others.

"And what they do is, if a company opens up, they flood the market, put the private sector out. So it's not just bringing the companies back, but having them maintain themselves. Part of that is having a modernized stockpile inside America," McCarthy said.

McCarthy dismissed the argument that it's "cheaper" for American companies to produce drug, medical equipment and other products in China;

"Is it cheaper or safer?" he asked. "How many lives have died because of what China has done, lying to the world?

"But what China did, not only when they were lying to the world, they tried to control the market when it came to the personal protection equipment, the masks, the gowns and others, they wanted to hoard those before the world found out.

"Why would we ever put ourselves in this place again? And what 's most concerning to me, the Democrats have no plan to hold China responsible. They don't even have a plan to reconvene Congress,"  McCarthy noted.

At a Pentagon news conference on Tuesday, Joint Chiefs of Staff Chairman Gen. Mark Milley was asked if he's seen any evidence that the Wuhan virus emerged from a biomedical lab in that city:

On the Wuhan origin case -- I'm not going to discuss any detailed intelligence, but the straight, fundamental issues here -- One, is it natural or was it man-made, somehow, or somehow  manipulated by man-made procedures? As I said the last time, and I am still where I was the last time -- the weight of evidence, nothing's conclusive. The weight of evidence is that it was natural and not man-made.

The second issue is, was it accidentally released? Did it release naturally into the environment or was it intentional? We don't have conclusive evidence of any of that, but the weight of evidence is probably that it was not intentional.

The third issue is location. Did it come out of a virology lab in Wuhan? Did it occur in the wet market there in Wuhan -- did it occur somewhere else? And the answer to that is, we don't know. And as mentioned by many people, various agencies, both civilian and U.S. government are looking at that.

It would help a great deal if the Chinese government would open up and allow inspectors and investigators to go there, in full transparency, so that the world can know the actual original source of this so we can apply the lessons learned to prevent outbreaks in the future.

Also See:
China Releases Timeline to Back Its Outbreak 'Transparency' Claim, But It’s Full of Holes