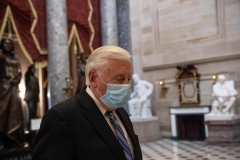 Rep. Steny Hoyer (D-Md.) wears a face mask in the House chamber during debate on the fourth relief bill on April 23, 2020. (Photo by NICHOLAS KAMM/AFP via Getty Images)

(CNSNews.com) - The Senate plans to be back in session on May 4, but the House will remain in recess because of coronavirus fears. Doctor's orders, Rep. Steny Hoyer (D-Md.) told a news conference on Tuesday.

But he assured Americans that lawmakers are working "very, very hard at home."

"Let me say this, and I hope you guys convey this to the American people, and you know it's true. I think most members are working harder than they would work if they were at the Capitol," Hoyer said.

They won't be at the Capitol for a while though, Hoyer explained:

After further discussions with the House physician late yesterday (Monday) afternoon and really last night, I came to the conclusion that the doctor's recommendations were that, A, the numbers in the District of Columbia are still going up so there's not a flattening of the curve. B, in our region, as you probably know both at Prince Georges County and Montgomery County, they are both hotspots. And C, because the CARES 2 Bill, which is our major piece of business that we have been working on for some weeks now and continue to work on will not be, we think, definitely ready to be considered next week.

Hoyer said the Democrat-led House also wants to tackle "other matters," including "health care infrastructure, reducing health disparities...funding for elections, which we have tried to get in for a couple of times now."

Hoyer also mentioned "oversight," and ensuring that Washington, D.C., "is treated as a state." He mentioned federal funding for the Postal Service, and "food shortages," given problems at meat-packing plants.

"Now, I want to emphasize, and I want you to know this, members are working very hard at home with their constituents, hospitals, banks, small lenders, small business, other people who we are trying to assist," Hoyer said. "In addition to that, they're on the phone almost every day talking about the legislation that we're going to offer and put together."

Hoyer said when the House reconvenes, members will wear masks, use hand sanitizer, and wipe down microphones and armchairs. "So we will continue to plan for and implement those safety measures when members do come back."

A reporter asked Hoyer if he's worried about the optics of having the Senate in session and the White House working while the House stays out:

Hoyer disputed the notion that the Senate "is working," given the many House-passed bills that are "slumbering" in the Senate.

"As I understand it, the Senate is coming back so they can confirm judges and confirm executive appointments. Now, whether they are going to do any substantive legislation is another question. They haven't been doing that, as you know, for the last year and a half," Hoyer cracked.

Hoyer also disputed that the White House is working -- "if the nightly press conference is called working, I guess you are right, but one could argue that point," he said.

Then Hoyer claimed that most House members "are working harder than they would work if they were at the Capitol."

"My point is, any thought that the members aren't working very hard trying to help their people with this coronavirus challenge is simply incorrect. They are working very hard. The question is, can we get them back safely when needed, and the fact is you have seen we have done that, but they have been working, I think, daily to help their communities deal with the coronavirus crisis."

In response to another question, Hoyer said he and House Speaker Nancy Pelosi, in consultation with the House physician, decided "we ought to listen to the medical authorities because we have urged that to be the case for everybody, and so that is what we are doing."

Many members of Congress are elderly, including the 80-year-old Pelosi.