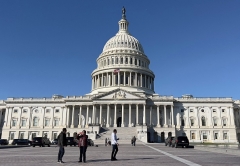 (Photo of U.S. Capitol by DANIEL SLIM/AFP via Getty Images)

(CNSNews.com) - "This is a moment when we need both voting rights and the Build Back Better bill," Rep. Jan Schakowsky (D-Ill.) told CNN in a holiday weekend interview.

She said Democrats are not giving up on either of those two major agenda items, even though both of them currently lack the 60 Senate votes needed to move to a vote.

After West Virginia Democrat Joe Manchin made it clear that he would not vote for BBB, thus dooming Senate passage, Democrats, including President Joe Biden, moved "voting rights" to the top of their legislative agenda.

Schakowsky said the voting legislation must pass, even if Democrats have to kill the Senate filibuster -- the 60-vote rule -- to get it done:

There's no question that if American people cannot vote, and if we don't have legislation that is passed that will assure that, that that is real damage to our democracy. No question about it.

And so, we're hoping that in the Senate, after all, the bill that actually would restore our voting rights is Joe Manchin's bill, that it is my hope that we're going to be able to get it passed. If we do it with just a majority of votes, that's the way we have to do it. It has to be done.

Our democracy is very fragile, and this isn't -- no -- you know, no time to waste right now.

But wait, there's more. Democrats also want to pass some version of Build Back Better:

“That's not to say that we don't want to move ahead quickly on the Build Back Better bill," Schakowsky said.

"It is transformational in terms of what it would mean just to the life of ordinary Americans, the kind of help for families. So we're going to push that as well. We're not giving up on that fight."

Schakowsky said she's not giving up on Manchin, either, who supposedly agreed to the bill's "framework," before saying he could not vote for it.

We agree on the top line number, but he also, according to the president, he said that he agreed with the framework as well. And if you have some specific things right now that he says, yes, I could vote for if we had this, then -- you know, we need to -- we need to listen.

But the outline of this legislation has also been clear for a very long time, and the president felt before he went on to Fox News that he had had a commitment that there was going to be moving forward.

So I don't want to give up on that, and certainly all the groups that are engaged in this, the mobilization of people, people who are trying to reach voters in West Virginia as well, and the West Virginians, including the mine workers who have been talking to Joe Manchin want the build back better bill to pass, and Americans really need it, especially right now, I would say.

This is a moment when we need both voting rights and the Build Back Better bill.