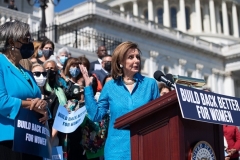 (CNSNews.com) - President Biden insists that his "Build Back Better" behemoth will be fully paid for by raising taxes on corporations and the wealthy.

"We’re going to pay for everything we spend," the president insisted on Friday, as he plugged the $3.5 trillion reconciliation bill with all its freebies and subsidies and green new deal.

Biden repeatedly has said that no one earning $400,000 a year or less will see a tax hike.

But Rep. Kevin Brady (R-Texas), a member of the House Ways and Means Committee, said many Americans will be hit with higher tax hikes:

"I have never seen Washington spend so much to kill so many American jobs, to raise prices even higher and expand the welfare state, the greatest expansion in our lifetime," Brady told "Sunday Morning Futures" with Maria Bartiromo:

This is an economic surrender to China, Russia, and Europe, with saddling American businesses with some of the highest tax rates in the world, which will drive and kill, we think, about three million jobs, drive many of them overseas, and make it easier to be a foreign company and work within the U.S. company or worker.

Secondly, they are devastating tax increases on local small businesses, just as they're trying to struggle to get out of this pandemic economy and get Americans back to work. And, as we pointed out, this breaks President Biden's pledge to not raise taxes on the low- and middle-income families.

And you don't have to take our word for it. The Congress's own scorekeeper, the Joint Committee on Taxation confirms that low-income, middle-class families will begin to see tax increases...beginning next year.

So, these -- and to put them in perspective, these tax hikes on our local businesses are three times greater than the tax cuts we gave them to spur this economy.

As part of an effort to catch tax scofflaws, Biden wants to hire almost 87,000 more IRS agents, more than doubling the size of the agency.

One controversial provision of the bill would require banks to report to the IRS total deposits and withdrawals in personal and business bank accounts.

"It would ask just for two pieces of information from the banks of these folks," Biden said on September 16. "The amounts that come into their bank accounts and what amounts go out of their bank accounts, so that the wealthy can no longer hide what they're making and they can finally begin to pay their fair share of what they owe."

Brady said the bank surveillance provision was not in the bill passed by the House Ways and Means Committee, but, he added, "I predict it will be before this bill comes to the House floor, and for this reason," he said:

Democrats are so eager to provide a huge SALT (state and local) tax break, which mainly goes to millionaire households. And it will cost between $100 billion and $400 billion. I think where they believe they will get it is doubling the number of IRS agents to 80,000 in America and this bank surveillance. They believe, between the two, they will cover the money for the (SALT) tax break for the wealthy...

But who pays the real price here are working families, small businesses, farmers, who will have their -- both their personal and their business bank accounts surveilled by the IRS. Local banks don't want to do this. They know this is a horrible intrusion on the privacy of everyday Americans.

And they think, as I do, that the real target here is not big business or the wealthy. I think they're coming after our farmers, our families and our local small businesses with this bank surveillance. I predict they put it in.

And they think, as I do, that the real target here is not big business or the wealthy. I think they're coming after our farmers, our families and our local small businesses with this bank surveillance. I predict they put it in.

"We are now working together with the Senate and the White House on changes to this historic legislation For The People, which includes the Child Tax Credit, child care, paid family and medical leave, home health care, universal pre-K and more. This legislation is transformative for women in the workforce and for addressing the climate crisis," she said.

Asked if Republicans can block the Democrats agenda -- most of it rolled into the one gigantic bill, Brady said Republicans will need help from moderate Democrats:

"Yes, I believe we can stop this, Maria, but we can't do it by ourselves," Brady said.

"The question for the coming week is not about Nancy Pelosi's leadership here. This is a test of whether there are moderate Democrats left in the House who will fight for their local small businesses and for American workers. That's the real key...Are there any left? Only three needed to stop this."