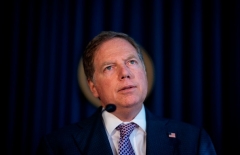 (CNSNews.com) - We don't know why Attorney General William Barr requested the resignation -- and later fired -- Geoffrey Berman, the US attorney for the Southern District of New York, but Democrats made it clear over the weekend they suspect Barr was running interference for the president.

Rep. Jerrold Nadler (D-N.Y.), the chairman of the House Judiciary Committee, noted that Berman had been investigating Trump's attorney Rudy Giuliani, among other Trump-related probes.

Nadler told CNN's "State of the Union" he's sure that Berman will testify before the committee at some point. But Nadler also said impeaching Barr is "a waste of time at this point."

Host Jake Tapper asked Nadler, "Do you think calls for his impeachment are premature?"

So, we're going to -- we're instead going to do what we have to do without that, and including barring $50 million from his own personal budget.

"But again, that's a waste of time, because the Republicans in the Senate won't look at that, and we have other ways of getting at this."

-- Attorney General Barr is using his authority to shield Donald Trump, his family, and his campaign. This is a blatant abuse of power. I have a bill to prevent Barr from interfering in matters that relate to Donald Trump—Congress should pass it now.

-- This is a naked abuse of power. I’ve already called for AG William Barr to resign & for Congress to impeach him. Congress should pass my bill now to defund Barr’s authority to interfere with matters related to Trump, his family, & his campaign.

Warren's bill, introduced in February, would prohibit high-level appointees in the Department of Justice from participating in matters in which the President, a relative of the President, or an individual associated with the campaign of the President is a party.

Late Friday, Barr announced that Berman was resigning, but Berman issued a statement of his own, saying he had no intention of stepping down.

On Saturday, Barr wrote to Berman: "I was surprised and quite disappointed by the press statement you released last night."

"Unfortunately...you have chosen public spectacle over public service. Because you have declared that you have no intention of resigning, I have asked the President to remove you as of today, and he has done so."

Barr also said he expects cases now pending in SDNY will be handled in line with all "applicable standards, policies, and guidance.

"Going forward," Barr wrote, "if any actions or decisions are taken that office supervisors conclude are improper interference with a case, that information should be provided immediately to Michael Horowitz, the Department of Justice's Inspector General, whom I am authorizing to review any such claim.

“The Inspector General's monitoring of the situation will provide additional confidence that all cases will continue to be decided on the law and the facts."

President Trump seemed to distance himself from Berman's firing: "We have a very capable attorney general, so that's really up to him. I am not involved," Trump said on Saturday.