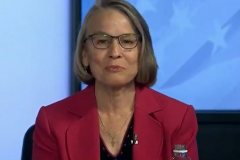 Mariannette Miller-Meeks, an Iowa Republican, defeated her Democrat opponent by six votes in November. House Democrats have begun an investigation that could end up unseating her. (Photo: Screen capture)

The voters of Iowa’s 2nd District spoke in November. Their votes were counted. Then recounted. The outcome was certified. There was the opportunity to present complaints in court, but the defeated Democrat passed it up. The process played out in the way that every liberal in America spent November, December, and January insisting was beyond question.

But there’s a catch. This time, the Republican won and the Democrat lost. So Speaker Pelosi and Washington Democrats have set out trying to overturn the result from here in Congress.

But Democratic leadership is trying to use brute political power to kick her out and replace this Congresswoman with the Democrat whom she defeated. You don’t often see hypocrisy this blatant, this shameless, so quickly.

Naturally, now that Democrats stand to benefit, the concept of Washington, D.C., overturning a certified election has gone from a massive outrage to a minor afterthought for much of the national media.

This is happening at the same time that House and Senate Democrats are pitching a massive takeover of all 50 states’ election laws. The same people who are trying to overturn this certified election result want to ram through a bill that would let them control the democratic processes that will determine whether they keep their jobs and their majority in two years’ time.

This isn’t about principle. It’s just an attempt to use a temporary majority to pull off a permanent partisan power grab.

In an interview with ABC's "This Week" on Sunday, House Speaker Nancy Pelosi (D-Calif.) defended the House Administration Committee's effort to unseat Miller-Meeks:

"Why investigate an election that was certified by the state?" host George Stephanopoulos asked Pelosi:

"Well, it was six votes. It was six votes, and our candidate Rita Hart, the Democratic candidate, asked for this process to begin," Pelosi responded:

What the committee did, the House Administration Committee, was very narrow, to take the process to the next step and see where it goes from there. An election of six votes out of 400,000 votes cast.

This is not unique. This has happened -- maybe even when you were in the Capitol before, when races had been close one side or the others saying, let's -- let's take it to the House. Because even Justice Scalia agreed that the House has the authority to seat members, and therefore we can count the votes. Six votes out of 400,000 cast.

For them to call anybody hypocritical about elections when two-thirds of them in the House voted against accepting the presidency of Joe Biden is -- well, it's just who they are.

"What is really happening here, Sean, you know it. The Democrats have the smallest majority in their history in the last 100 years, only five seats, so every they can steal helps them, helps them be able to pass the most socialist things they can. They've done this before, back in 1984, they call it the 'bloody Eighth,' Indiana (District 8), and that is exactly what Pelosi is trying to do...We cannot allow them to steal something that has a recount and certified. But that's exactly what they were trying to do this week."

Likewise, Sen. McConnell noted on Thursday that Democrats are afraid of losing their "razor-thin majorities in both chambers. And so they’ve decided their top priority is a Washington rewrite of election rules. The 2nd District in Iowa is just the appetizer. Soon Democrats want to come for the main course."

The main course is HR-1 -- an attempt by Washington Democrats to federalize elections and erase safeguards passed by the states.

According to a government website: "Contests for seats in the House are governed by the Federal Contested Elections Act.  This statute, enacted in 1969, sets forth the procedure by which a defeated candidate may have his claim to a seat adjudicated by the House. The act provides for the filing of notice of contest and other proceedings, for the taking of testimony of witnesses," and for a House Administration Committee hearing on the depositions and other papers that have been filed with the Clerk."