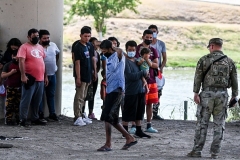 Migrants are apprehended by US Border Patrol and National Guard troops in Eagle Pass, Texas, near the border with Mexico on June 30, 2022. (Photo by CHANDAN KHANNA/AFP via Getty Images)

(CNSNews.com) – "We were very pleased with the Supreme Court's decision" that says the Biden administration can end the Trump administration's "remain in Mexico" immigration policy, Homeland Security Secretary Alejandro Mayorkas said on Sunday.

And, until then, we are obligated by the district court's ruling to continue to implement the remain-in-Mexico program. And we will do so in accordance with law," Mayorkas told CBS's "Face the Nation."

Thousands of would-be asylum seekers still have to wait in camps on the Mexican side of the border. But not for long. They'll all be placed in "immigration enforcement proceedings," Mayorkas said:

"Remember, when people are encountered at the border, they are just not merely released into the United States. They are placed in immigration enforcement proceedings. And that is what will occur with these people.

"Their proceedings will continue in immigration court, where they will pursue their claims for asylum. And if those claims are unsuccessful, they will be swiftly removed from the United States."

Mayorkas said the U.S. is "working very closely with our partners to the south" to break up the caravans of people making the "dangerous journey to reach our border, only to be met with the enforcement of our laws. We have said repeatedly, and we continue to warn people not to take the dangerous journey."

He pointed to the recent horrific discovery of 53 illegal aliens smuggled into the U.S. only to die in a hot truck in San Antonio, Texas.

"And we continue to enforce immigration law, as is our legal responsibility," he said.

Margaret Brennan pushed back: "What I hear you saying is, do not come. But those words are not being heard. People are moving right now. So the efforts to stop the root causes are not stopping them.”

She pointed to the “worst smuggling tragedy in U.S. history” in San Antonio. “Are you predicting that this is only going to get more significant from here, that we're going to go beyond the record surge in migrants?" she asked.

"No, I'm not predicting that at all," Mayorkas said:

"And, in fact, in the wake of the San Antonio tragedy -- and our Homeland Security Investigations is the lead federal agency investigating what occurred and working with the United States Attorney's Office in the prosecution of thus far four individuals who have been charged with that heinous crime.

“We're working with our partners to the south, because this is a regional challenge that requires a regional response.

“I last week spoke--" he started to say, when Brennan interrupted, noting that the tractor trailer full of human beings managed to get past U.S. border officials:

"Oh, so we have a multilayered approach, Margaret," Mayorkas said:

"We, of course, have our inspections at the port of entry with our sophisticated nonintrusive technology. We then have checkpoints that are staffed 24 hours a day, seven days a week. The Laredo checkpoint in question, 10,000 to 14,000 vehicles pass through that checkpoint every day. This fiscal year alone..."

"So, how did this smuggler get these people across? Fifty-three people died," Brennan interrupted again:

“And we are much more sophisticated using technology and personnel 24 hours a day. You know, we have saved more than 10,000 individuals this fiscal year alone in more than 400 vehicle inspections.

"So, can a truck get through, through sophisticated means? Sometimes, yes. But I have to say, we have interdicted more drugs at the ports of entry than ever before. We've rescued more migrants. We're seeing a challenge that is really regional, hemispheric in scope, and we're addressing it accordingly."

Sen. Mike Lee (R-Utah) told "Fox News Sunday" that Trump's remain in Mexico policy was working and "It's too bad" that the Supreme Court is allowing the Biden administration to scrap that policy.

"Look, this was a policy that helped us make our Southern border secure for the first time in a long time. It was also, moreover...more or less required by existing law," Lee said.

"The Immigration and Nationality Act had already required a number of steps tantamount to what they did in remain-in-Mexico. So I see this as an unfortunate misstep by the court, a missed opportunity to help strengthen our border. And I fear that it could further empower the drug cartels making billions of dollars off of smuggling people into the United States."

Illegal immigration has reached record levels under President Biden, who came into office vowing to undo everything President Trump did (the wall, remain in Mexico) to discourage illegal immigration. The chart below tells that story. 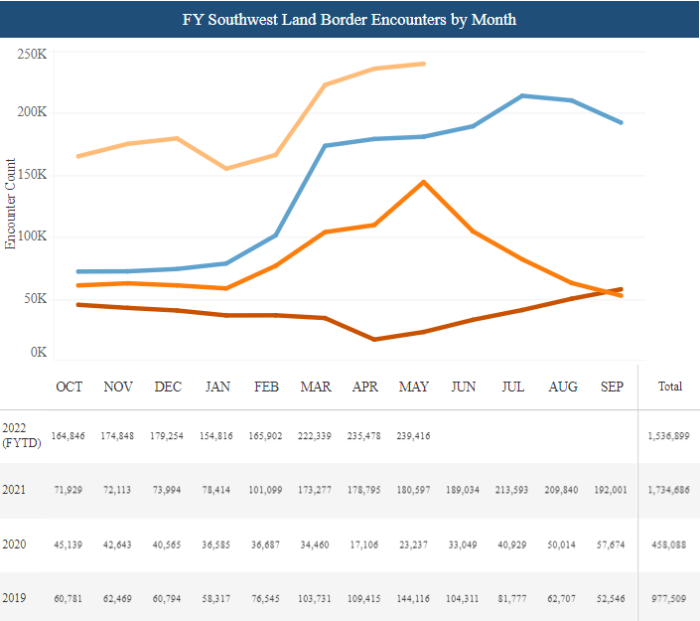 "RGV agents encountered eight large groups totaling 1,171 migrants in Starr and Hidalgo counties in the last five days. The groups were comprised of 638 family members, 340 unaccompanied children, and 193 single adults. The migrants were from Cuba, Asia, and various Central and South American countries." That is just one of nine CBP sectors that stretch from Texas to California.