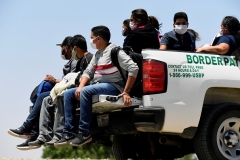 Illegal immigrants are detained by U.S. Customs and Border Protection at the border near San Luis, Arizona. (Photo by Nick Ut/Getty Images)

(CNSNews.com) - In an often-heated hearing on Thursday, Homeland Security Secretary Alejandro Mayorkas was challenged over his management -- or failure to manage -- the overrun southwest border.

In one of those contentious moments, Rep. Jim Jordan asked Mayorkas about a Fox News report that 42 people on the terror watch list or no-fly list have been apprehended trying to sneak into the country since Joe Biden became president.

"Secretary, have any of the 42 illegal migrants on the terrorist watch list or no-fly list encountered on our southwest border been released into the United States?" Jordan asked Mayorkas.

"Ranking Member Jordan, as I mentioned before, I will provide that data to you with respect to the disposition of each one. I do not know the answer to your question," the secretary said.

Jordan responded: "The Secretary of Homeland Security does not know the answer to the status of 42 individuals who came to our southern border illegally, are on the no fly list, and the -- and the no -- and the terrorist watch list. You do not -- do not know whether they have been released or not into the country. That's your testimony."

"Ranking Member Jordan, as I've said before, I will provide you the data. I do want to --"

Jordan interrupted him: "I yield back to the gentleman. That's amazing. I yield back."

Fox News first reported that 23 people on the terror watch list or no-fly list had been apprehended at the southern border between Jan. 20 and the end of December.

Later, Fox put the number at 42, noting that "This latest figure includes the Office of Field Operations (OFO) data, and therefore includes those encountered at ports of entry. The information includes nationwide arrests and is not specific to the southern border," Fox reported.

Of course, as various Republicans have noted, no one knows how many dangerous people have entered the country undetected.

Also See:
Illegal Alien With Links to Terrorism Removed from US -- Seven Months After His Arrest

Mayorkas: 'We Will Continue to Enforce Our Immigration Laws'; 'We Have Effectively Managed an Unprecedented Number of Noncitizens'