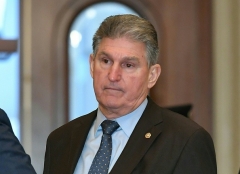 (CNSNews.com) - "There's a lot of people that are concerned" about what Democrats might do if they end up controlling all three branches of government, Sen. Joe Manchin (D-W.V.) told Fox News's Bret Baier Monday night.

"So I commit to you tonight -- and I commit to all of your viewers and everyone else that's watching -- I want to allay those fears, I want to rest those fears for you right now because, when they talk about whether it be packing the courts or ending the filibuster, I will not vote to do that."

Bret, this system, the Senate, this so unique body in the world, it was made to work together in a bipartisan way. And once you start breaking down those barriers, then you lose every -- every reason that we are the institution that we are, the most deliberative body.

So, I want to lay those fears to rest, that that won't happen, because I will not be the 50th Democrat voting to end that filibuster or to basically stack the court.

And then all the other things you're hearing about, Bret, also, is -- defund the police. I don't know of any of the Democrats in the caucus that are for defunding the police. We are not for that whatsoever.

And when they talk about basically Medicare for All, we can't even pay for Medicare for some. It doesn't make any sense at all. We have got to fix the Affordable Care Act we have. And I think our Republican -- moderate Republicans will work with us to now repair what needs to be repaired.

Baier told Manchin: "Let me just clarify here, Senator. You are saying definitively tonight, that, even if Democrats take control, and Chuck Schumer becomes the Senate majority leader, that, they try to break the filibuster, say the filibuster is over, you will definitively vote against that?"

"Absolutely. I will vote against that," Manchin replied.

I have been very clear about that.

I thought we should be working together. It should take a minimum of 60. And that means you are going to have to have a few Democrats or Republicans, depending on who's in the majority, to work together. That's what we are all about.

Why would you break that down? Then there's no need to have the Senate.

Baier noted that there would be enormous pressure on Manchin to follow the party line. But Manchin told Baier he's done it before: "I voted for Neil Gorsuch. I voted for Brett Kavanaugh." (He said he voted against the confirmation of Judge Amy Coney Barrett because of the timing, so close to the 2020 election.)

But Manchin did vote to confirm Barrett to the 7th Circuit Court of Appeals.

Manchin, who represents a bright red state, said he will remain a "proud moderate-conservative Democrat."

"Maybe there's not many of us left. But I can tell you, this country wants a moderation. This country, you run your life, you run your business from the middle, not from the fringes. And that's where I have always been.

"So, for something, whatever the message was, it was wrong for this many people to be split, for us not to be able to have a message that didn't scare the bejesus out of people. And when you're talking about, basically, Green New Deal and all this socialism, that's not who we are as a Democratic Party.

"If not how I was raised in West Virginia. It's not the Democrats I know. But yet we have been tagged...If you have a D by your name, you must be for all the crazy stuff, and I'm not."

(Manchin did vote yes on Articles of Impeachment brought against President Donald Trump.)