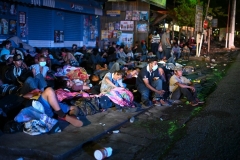 Honduran migrants, part of a caravan heading to the US, rest on a sidewalk in Entre Rios, Guatemala, after they crossed the border from Honduras on October 1, 2020.(Photo by JOHAN ORDONEZ/AFP via Getty Images)

(CNSNews.com) - A pathway to citizenship for "all" illegal aliens; no deportations in the first hundred days; and health care coverage for illegal aliens. Those campaign promises made by Democrat Joe Biden explain the most recent rush to the U.S. border by tens of thousands of people attempting to come here illegally.

"And we know -- what's the driving factor behind illegal immigration? Economics, not lawful asylum.

Because of COVID-19 and worsening economic conditions in Central America, the numbers have been steadily going up in recent months, he noted.

"But here's what we're seeing now. And your listeners need to understand that this is unequivocally, it's what's happening, is that there is now a belief and a presumption, whatever adjective you want to use, that with a new administration coming in, if that happens, is that our borders are going to be wide open."

Morgan said not only will a Biden administration freeze deportations, "they're going to stop the Migrant Protection Protocols," the Trump administration requirement that undocumented people must wait in Mexico until their asylum claims are decided in U.S. immigration proceedings.

Morgan said the belief that a Biden administration will "undo" all that Trump has done -- "That's what's driving this new wave of illegal immigration."

The Migrant Protection Protocols ended "catch and release" and prevented 230,000 illegal immigrants from coming into the United States," Morgan said. "You can't tell me that did not save countless American lives. Now you have judges like Judge (Emmet) Sullivan trying to throw it away."

According to the ACLU, the border restrictions resulted "in the summary expulsion of at least 13,000 unaccompanied children without any due process — even if the child was fleeing danger and seeking protection in the United States and showed no signs of having COVID-19."

Host Laura Ingraham noted the irony of locking down the United States but opening the U.S. border during a pandemic:

"Just like Judge Sullivan's order, it's a dangerous order. It defies common sense. Think about this, these individuals, including the unaccompanied  minors, they're traveling through, impacting COVID areas, they're shoved in stash houses for days and weeks, overcrowded, unsanitary, in tractor trailers, all of those active COVID petri dishes. Right?"

Morgan pointed to statistics kept by the Health and Human Services Department: "They said, of the unaccompanied minors that they've encountered, 11.6 percent of those have tested positive for COVID. This is a real threat."

Morgan added that he's had "over 4,000 agents and officers test positive for COVID. I've had 17 die."

The numbers show immigration was far lower for most of Fiscal Year 2020 than it was in FY 2019. CBP credited the decline to "domestic policy initiatives and international agreements."

According to CBP, those efforts included: "Agreements with Guatemala to address irregular migration, the Migrant Protection Protocols with Mexico, the final rule regarding non-Mexican asylum seekers at the southern border, interior enforcement operations, and international cooperation between the United States and Central American countries, particularly efforts to disrupt and dismantle alien smuggling organizations."