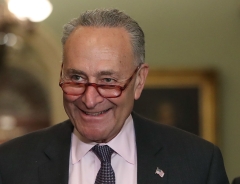 (CNS News) – When asked whether the Second Amendment to the Constitution, the right to keep and bear arms, should be removed, Senate Majority Leader Chuck Schumer (D-N.Y.) said, “no,” but added “no amendment is absolute” and there are “reasonable limitations” to the Second Amendment.

At the U.S. Capitol on June 14, CNS News asked Sen. Schumer, “The Second Amendment gives people the right to keep and bear arms. Should the Constitution be amended to remove it?”

“I believe in the Second Amendment,” he said. “I believe there’s a right to bear arms, but there are reasonable limitations. The Brady Law, the Assault Weapon Ban among them.”

The proposal, if it becomes law, would strengthen background check requirements for gun buyers under 21, fund mental health services, and set up red flag laws to temporarily confiscate guns from those deemed dangerous. The proposal also includes a first-time provision that prohibits domestic abusers from owning guns.

Senate Minority Leader Mitch McConnell (R-Ky.) announced his support for the plan on Tuesday, making him the 11th Republican to do so.

“Support for the provisions of the [bipartisan] framework is off the charts,” said Sen. McConnell following a GOP luncheon on June 14. “I think if this framework becomes actual piece of legislation, it’s a step forward, a step forward on the bipartisan basis and further demonstrates to the American people that we have come together … to make progress for the country.”

Similarly, Sen. Schumer tweeted that the agreement is “far from perfect, but it will help save lives."

This framework is far from perfect, but it will help save lives by:

Other Republican senators view the push for gun control as an issue that does not match Americans’ concerns for the economy.

And Republicans are helping him https://t.co/OJ1wRKHyxd

Stricter gun control measures, including raising the federal minimum age to buy rifles and shotguns to 21, barring a few exceptions, and regulating gun trafficking, passed the House on June 8 in response to the mass shooting at an elementary school in Uvalde, Texas. The bill is not expected to pass the Senate.

The Hill reported that Speaker Nancy Pelosi (D-Calif.) called the Senate’s bipartisan gun safety agreement “a step forward,” but noted that she wants the House Democrats’ gun-control measures turned into law as well.

“As we move forward on this bipartisan framework, we are continuing to fight for more life-saving measures: including universal background checks, banning high-capacity magazines and raising the age to buy assault weapons, which must also become law,” she said.