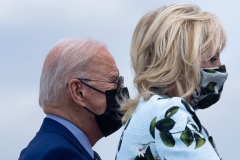 (CNSNews.com) – Asked why a fully-vaccinated President Biden still wears a mask outdoors despite amended CDC coronavirus precaution guidelines, a senior White House adviser said on Sunday she finds herself doing so too, out of “habit.”

“It’s interesting that you raise this,” Anita Dunn told CNN’s Jake Tapper. “I myself found that I was still wearing my mask outdoors this week, because it has become such a matter of habit.”

“And he’s always taken his role as sending a signal to follow the science very seriously, as well.”

“We do take some extra precautions for him because he is the president of the United States,” she said. “But I would say that people should follow the CDC guidelines, and they should take advantage of getting the vaccine, getting fully vaccinated, and taking that mask off, particularly as the weather grows so beautiful and we all want to be outside.”

Last week the CDC advised that Americans vaccinated against COVID-19 do not generally need to wear masks outdoors unless at a crowded venue – or indoors, with small groups of vaccinated people, or even unvaccinated people from one other household.

When Biden last Tuesday announced those changes on the White House North Lawn, he came out wearing a mask. Asked what message he was sending by doing so, he replied, “By watching me take it off and not put it back on until I get inside.”

When he delivered his “address to a joint session on Congress” on Wednesday night, just over 200 people were in attendance, compared to the 1,600 who would normally have been present for such an occasion. All wore masks, including House Speaker Nancy Pelosi and Vice President Kamala Harris who sat behind the president. Pelosi estimated that about 75 percent of lawmakers have been vaccinated.

In a Washington Post op-ed the following day, a public health professor at George Washington University and former Baltimore health commissioner Leana Wen fretted about the effect that “over-cautious” CDC guidelines could be having, pointing too to the setting of Biden’s speech on Capitol Hill and the very visible precautions taken during it.

“Already, a very damaging narrative is taking hold: If the vaccines are so effective, then why so many precautions for the fully vaccinated?” she wrote. “What’s the point of getting inoculated if not much changes?”

Wen, a former president of Planned Parenthood, said Biden possibly sought to differentiate himself from former President Trump when it came to mask-wearing and COVID-19 precautions.

“Over-correction has a price; at best, it makes public health measures seem performative rather than science-based,” she wrote. “At worst, it calls vaccine efficacy into question.”

Tapper quoted that line from Wen’s op-ed during his interview with Dunn.

“Should the president start following these guidelines and stop wearing a mask outdoors, stop wearing a mask indoors when with small groups of other vaccinated Americans, to show the American people there's a benefit to getting the vaccine, you can take the mask off?” he asked.

During a visit to Duluth, Georgia on Thursday, Biden – in an outdoor setting – briefly misplaced his mask, leaving the state’s two masked Democratic senators waiting behind him on the drive-in rally stage as he and First Lady Jill Biden, also masked, looked for it.

“I’m looking for my mask,” he told Sen. Jon Ossoff.

“I’m looking for my mask,” Biden then said into the microphone. “I’m in trouble.”