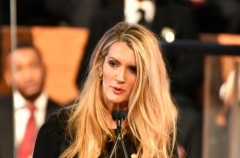 (CNS News) -- Five Republican senators, led by Kelly Loeffler (Ga.), have introduced legislation to protect women and girls in sports from biological males who claim to be transgender "females" and seek to participate in women's sports.

The Protection of Women and Girls in Sports Act would "make it a violation of Title IX for a school that receives federal education funds to permit a biological male to participate in a sports program designated for women and girls," according to a statement from the office of Sen. Kelly Loeffler (R-Ga.).

“Men and women are biologically different,” said Senator Lee. “That’s just a scientific fact. For the safety of female athletes and for the integrity of women’s sports, we must honor those differences on a fair field of competition.”

The bill states, "for purposes of determining compliance with Title IX of the Education Amendments of 1972 in athletics, sex shall be recognized based solely on a person’s reproductive biology and genetics at birth."

The bill would amend the Education Amendments to read, "It shall be a violation of subsection (a) for a recipient of Federal funds who operates, sponsors, or  facilitates athletic programs or activities to permit a person whose sex is male to participate in an athletic program or activity that is designated for women or girls."

As further explained in the statement from Loeffler's office, "schools that allow biological males to compete against women and girls in sports – disrupting the goals established by Title IX – would be in danger of losing federal funding."

"For example, a high-profile case in Connecticut resulted in two biological males winning 15 women’s track championship titles previously held by nine women," reads the statement. "One of these males set a first-place record for the women’s track event, which would have been 140th place in men’s track. The males also prevented the women from advancing to regional meets, taking away an opportunity for the women to compete in front of college scouts."

Commenting on the bill, Senator Loeffler said, “Title IX established a fair and equal chance for women and girls to compete, and sports should be no exception. As someone who learned invaluable life lessons and built confidence playing sports throughout my life, I’m proud to lead this legislation to ensure girls of all ages can enjoy those same opportunities. This common-sense bill protects women and girls by safeguarding fairness and leveling the athletic field that Title IX guarantees.”

“Maintaining the integrity of healthy competition is crucial for the future of women and girls in sports,” said Senator Blackburn. “Schools and universities that allow males to participate in women’s sports defeats the purpose of Title IX.”

Family Research Council President Tony Perkins said, “I applaud Sen. Loeffler for introducing the Protection of Women and Girls in Sports Act. Allowing boys to play on girls’ sports teams is unfair and it poses increased physical risk to girls, particularly at the high school and college levels. Senator Loeffler’s bill will help ensure that girls are afforded the opportunity to play on a level playing field."