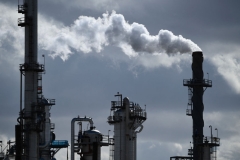 (CNSNews.com) - The Biden administration is planning to cancel three offshore oil leases in the Gulf of Mexico and Alaska.

Despite gas being at an all-time high, the White House claimed the decision was made in part because of “a lack of industry interest.”

“AAA is saying, you know, record-high nominal gasoline prices again today, but Americans are also seeing news about oil leases and auctions not going forward. What was the administration’s thinking on not having those auctions?” a reporter asked White House Press Secretary Jen Psaki.

“Well, the Department of Interior, who — they have put out some comments on this, and what they have made quite clear is that the Cook Inlet cancellation, which you’re referring to, was due to a lack of industry interest, and the Gulf sales were as a result of delays due to a number of factors, including conflicting court rulings,” Psaki said.

“So those were the two areas where you’ve seen the pause, but there was not interest,” the press secretary said.

“I would note that if we take a step back and look at what is available out there and look at the supply needed, as you noted at the top of — as part of your question, leasing and production offshore is a lengthier process. It can take up to 10 years to create supply. So, let’s start there,” she said.

“That’s almost 50 percent, and there are also over 9,000 onshore permits that have been approved and are waiting to be used onshore,” the press secretary added.

“So, just to reiterate what we expect: U.S. production is expected to increase by over 1 million barrels a day this year and hit a new record — record next year. This — these specific actions were as a result of lack of industry interest and a — and conflicting court rulings,” she said.