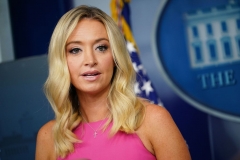 (CNSNews.com) - White House Press Secretary Kayleigh McEnany pushed back Wednesday on allegations in a new book by Bob Woodward, excerpts of which were released on Wednesday, that said President Donald Trump knew COVID-19 was “deadly stuff,” but he chose to downplay it.

CBS News White House Correspondent Paula Reid asked McEnany about the allegations, asking if the president misled the American people about the threat of COVID.

McEnany said that Trump has always been honest with the American people about COVID, and he’s been upfront about the need not to cause panic.

REID: I want to ask about the Woodard interviews. Did President Trump mislead the American people about the throat of covid, a pandemic that cost the lives of 200,000 Americans?

REID: Is playing it down, is that expressing calm?

MCENANY: Can you read the rest of the quote?

REID: That's how much they put in there.

MCENANY: You excluded the last part.

REID: Do you deny that he misled the American people about the threat of this pandemic?

MCENANY: Of course I deny that, and he makes clear that he doesn't want to see chaos by the way, is the second part of the quote, which you failed to read. The president just days after having this discussion with Bob Woodard, said this from this podium.

On March 30th he said, ‘I do want them to stay calm. We are doing a great job.’ If you look at the individual statements, they’re all true. Stay calm. It will go away, but it's important to stay calm. This president does what leaders do, good leaders. It’s stay calm and resolute at a time when you face an insurmountable challenge. That’s what this president has done.

McEnany stressed that Trump “has never lied to the American public on COVID.”

“The president was expressing calm and his actions reflect that. On January 6th, the CDC issued a Wuhan travel notice before any confirmed U.S. cases among a number of other actions, and I’d refer you to Dr. Fauci who said that this president had an impressive response. I can't imagine under any circumstance that anyone could do more. That is the record of this president,” she said.

ABC News Chief White House Correspondent Jonathan Karl pointed to what he said was “a direct contradiction” between what Trump told the public versus what he told Woodward.

KARL: How do you square the president's words to Woodard when he said this is a very delicate one. It's also more deadly than even your strenuous flu. This is deadly stuff, and then just two weeks later he said, ‘This is a flu. This is like a flu.’ And of course he also said it was going to quickly go to zero, but that seems to be a direct contradiction to what he told Woodard?

MCENANY: Well, the president was listening to medical experts because you also have at the same time period. Dr. Fauci who said this. Asked if the seasonal flu was a bigger concern, he said this on February 17th. So right now at the same time, people are worrying about going to a Chinese restaurant. The threat is that we have in this country, we’re having a pretty bad influenza season, particularly dangerous for our children, so he was reflecting that point, and again days later in a briefing, he said the statements I made are this: ‘I want to keep the country calm.’ That is what leaders do, and that's what President Trump does.

KARL: Dr. Fauci is not comparing the two. He’s not saying coronavirus is like the flu.

MCENANY: It was a COVID interview, and he was asked about seasonal flu vis a vis COVID, saying exactly what the president said. In fact, the president’s taking it more seriously, because on the tape, he noted that the flu could be worse, and he was taking action to address it. Once again context matters that zero reported COVID cases, the CDC was implementing public health screenings. House Dems were preparing to file their first briefs in impeachment.

When there was one reported case, the CDC was activating an emergency operation center while Pelosi was releasing a statement criticizing McConnell over impeachment. On January 31st, the president issued a travel ban on China, one that the former vice president called xenophobic. That’s what Democrats were doing while this president was acting, and his actions reflect the seriousness with which he took COVID-19.

Another reporter asked McEnany about National Institute of Allergy and Infectious Diseases Director Dr. Anthony Fauci’s on-the-record remarks, according to Woodward, that Trump’s attention span is “like a minus number” and his sole purpose is to get re-elected.

“The president by his own admission in private on the record acknowledged the depth of this crisis and yet told the American people something very different. How is that at its core not an abject betrayal of the public trust?” the reporter asked.

MCENANY: The president was always clear-eyed with the American people. He was always clear-eyed about the lives we could lose. Again from this podium, he acknowledged this was serious back in March, that 100,000, 200,000 lives could be lost. With regard to Dr. Fauci, you are referring to a quote he allegedly told Bob Woodard. I can give you quotes we could play on loop and video of him saying the response was impressive, and he can’t imagine anyone under any circumstance doing anything better.

Dr. Fauci saying this: ‘I can just tell you the president the first and only time I went and said you need to do mitigation strongly, the response was yes, we will do it. The second time I went with Dr. Birx to the president and said 15 days to slow the spread are not enough. We need to go to 30 days. Obviously there were a lot of people who had problems with that because of potential secondary effects. Nonetheless, the president went with the help recommendation, so there’s a long litany of praise from Dr. Fauci and you’re referencing something he allegedly told Bob Woodard.

REPORTER: It's on tape, Kayleigh.

MCENANY: I’m reading to you what Dr. Fauci has said very publicly for all to see, and we can all play those video clips. I can get them in your inbox.

REPORTER: President Trump on February 7th the president said it's deadly stuff about coronavirus in private on the record. In public though, February 28th he says one day it's like a miracle It will disappear. It's one thing as a public figure not to try to incite panic. It's a different thing respectfully to lie and mislead the American people about a crisis that claimed 200,000 American lives.

MCENANY: No one is lying to the American people. One day covid will go away. I think we can all hope for that day. We will have a vaccine because of this president tearing through bureaucracy to get a safe and effective vaccine. One day it will go away. That is a fact. It is not inciting fear.

This president has expressed calmness from this podium, mobilized the greatest mobilization of the private sector the greatest since World War II, got more tests than any country in the world on covid, a vaccine which by the way, it will be a record for a novel pathogen. The timing of this vaccine should we get it by the end of the year or should be to get it by 3 years which was the timing of Ebola. This president has done an unprecedented job dealing with covid, one that even Dr. Fauci acknowledged, and like I said I will get you that clip to your inbox.

Associated Press White House Correspondent Zeke Miller said the United States leads the world in COVID cases and death toll compared to other countries, and he asked whether Trump bears responsibility for that record as well as testing and the vaccine.

McEnany corrected Miller, saying that the U.S. COVID fatality rate is actually the lowest compared to the rest of the world.

“No. When you look at the rest of the world and in particular the case fatality rate in the United States is 3%. The world is 3.3%. The UK 11.9  percent. France 8.8 percent. Belgium 11.2%. You can go through the various western world countries that have dealt with COVID. We have done a very good job. The case fatality rate notes that, and it’s a testament to our therapeutics that the president has navigated,” she said.

“Case fatality rates is the metric that shows how well our response has done with therapeutics, and We are leading the world in having the lowest case fatality rate. It’s a very important metric, and it’s one That is attested to the president who ripped true barriers getting us Remdesivir, convalescent plasma, and other very good working therapeutics,” the press secretary said.