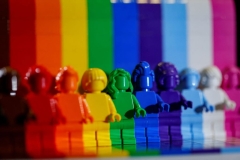 This picture taken on June 3, 2021 shows Danish toy brick maker Lego's "Everyone is Awesome" new set of rainbow-coloured figurines to celebrate the diversity of its fans and the LGBTQI+ community. (Photo by THOMAS SAMSON/AFP via Getty Images)

(CNSNews.com) - Saudi officials are cracking down on expressions of homosexuality by seizing rainbow toys and clothing, according to state media.

Those items include bows, skirts, hats and pencil cases - most of which were manufactured for children, according to a report broadcast Tuesday evening by the state-run Al Ekhbariya news channel.

“We are giving a tour of the items that contradict the Islamic faith and public morals and promote homosexual colours targeting the younger generation,” an official from the commerce ministry, which is involved in the campaign, said in the report, according to The Guardian.

“We’re just about to go into a Pride event. We know that Saudi officials have been seizing rainbow colored toys and clothing as part of an apparent crackdown on homosexuality in the country there. That’s according to the state-run media. I wonder what the White House response is to that given that the president’s about to set up his Pride credentials in the next event,” a reporter asked Wednesday at the White House.

White House Press Secretary Karine Jean-Pierre said Wednesday that while she had not seen that reporting, the Biden administration is working “around the globe to protect LGBTQI+ persons from violence and abuse, criminalization, discrimination and stigma, and empower local LGBTQI+ movements and persons.”

“We do this through bilateral and multilateral channels, raising official concerns with governments both principal and privately, coordinating our efforts with like-minded countries and offering emergency assistance to LGBTQI+ persons at risk through our foreign assistance programming,” she said.

“We support civil society and providing LGBTQI+ individuals and communities with tools and resources to prevent, mitigate and recover from violence, discrimination, and stigma. We see human rights as being universal,” the press secretary said.