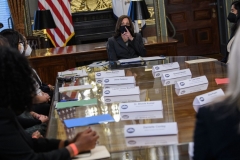 (CNSNews.com) - Vice President Kamala Harris said Thursday that the Texas abortion law, which bans abortions when an unborn baby has a heartbeat, amounts to “an abortion bounty law, empowering vigilantes with a private right of action to interfere with a woman’s relationship with her healthcare provider.”

Speaking prior to a “reproductive rights roundtable” on Thursday, the vice president said that she and President Joe Biden are “unequivocal” in their support of “Roe v. Wade and the constitutionality of Roe v. Wade, and the right of women to make decisions for themselves with whomever they choose — about their own bodies.”

So we will have a conversation about how what is happening in Texas is affect- — affecting women in Texas, but, as we know, it’s not only Texas where this is happening.  And I know we’re going to talk about Mississippi. We’re talking about New Mexico. We’re going to talk about the United States and what we must do collectively — all of us — to protect the women of our country and protect their constitutional rights.

All of this, again, is in the wake of the Supreme Court ruling, as it relates to the Texas law, which is essentially an abortion bounty law, empowering vigilantes with a private right of action to interfere with a woman’s relationship with her healthcare provider.

The Supreme Court has allowed a state law to stand that deputizes citizens — anyone — to proclaim themselves in a position to have a right under law to interfere with those choices that that woman has made.

Today, also, our Gender Policy Council, the leaders of whom are here, will talk — as part of this conversation — about the whole-of-government approach that our administration is taking to protect women and to protect healthcare providers and all those who have had the best interest in protecting the constitutional rights of women so that we can ensure that — to the extent we are able to elevate the voices and protect constitutional rights — that we are doing everything within our power as an administration to get that done.

And on the point about Texas, this is not a one-off. It’s not the only state that is doing this. Right now, there are 22 states that have laws that could be used to restrict the legal status of abortions - 22.  Ninety provisions that restrict access to reproductive healthcare were passed in 2021 - 90 provisions.

“Well, let me tell you, first of all, this is an issue that I’ve been — along with so many other leaders, including the leaders at this table — been a strong advocate for, which is the right of a woman to make decisions about her own body and not to have anybody interfere with her ability and her right to make that decision. On the issue of laws, the president has said, I have said, and I will repeat myself: We need to codify Roe v. Wade,” Harris said.