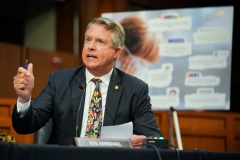 “This is a human tragedy here. At night time it looks like a war zone. there's a sea of humanitarian crisis here. Every evening and every day it’s lived out as well. I just want to shout out the Border Patrol officers are doing an incredible job. The Department of Public Safety here in Texas, all those people are doing the best. They are simply overwhelmed,” he said.

“This is an unsustainable crisis. It’s a war zone every night. I am calling on Joe Biden to come down here and see this for himself but I don't mean do a flyby stop at the airport here in McAllen. He needs to come down, spend some time on the river. He needs to fish people out of this Rio Grande River behind me after they’ve traveled thousands of miles,” Marshall said.

When asked whether the Biden administration will pause the lifting of Title 42 after a federal judge ordered it to do so on Monday, Marshall said, “Nobody told the migrants that are stacked up like cordwood on the other side of the river that Title 42 is not ending tomorrow.

“Joe Biden has to stop sending this signal to everybody. He needs to stop making this a magnet. When he announced he was ending Title 42, that was the magnet for the rest of the world, and like you said there’s been about 8,000 encounters per day. We expect that to go to 18,000 starting tonight. That’s already double from what it was a year ago,” the senator said.

“I want to circle back on one point. The ranchers I visited with yesterday on their ranches when President Trump was president they would see one or two dead bodies per year. They've already found 100 bodies on one ranch on year to date right now. This is exploding, the fentanyl, all those issues you talked about is why you this is a war zone. This is why this is important to Kansas. This is why Kansas is no longer a border state,” he said.

Marshall said that the Biden administration has been derelict in their duties.

“Our president is derelict in his duties, so is the secretary who supposedly visited down here as well. I don't know what they’re seeing there that I am not, but you’re right. Those numbers sound very accurate to me. If you figure, there’s 8,000 people crossing a day that we’re apprehending - twice that number getting across the border,” he said.

"Let's just call it 25,000 people every day, and we’re paying the cartel through our NGOs. All these people down in the triangle are paying $3,000, $4,000, $7,000 a person. Joe Biden is making the cartel rich, and he’s threatening our national security. Maria, this is the greatest national security crisis that’s immediately facing this nation right now,” the senator said.

When asked whether it’s intentional that the Biden administration is letting 18,000 migrants cross the border into the U.S. in one day, Marshall said, “Right, that’s why this crisis is unsustainable, and again, I just can't tell you.

“Even over the last year, Operation Lone Star, Governor Abbott is down here putting layer after layer, putting state troopers on boats on the river behind me, interacting with the Department of Public Safety with the National Guard, with the Border Patrol, the sheriff's officers layer after layer just like you do in wartime trying to slow down this enemy. The human trafficking, the human smuggling is exploding as well. It is unsustainable,” he said.

“This is completely unsustainable. We are in the middle of a great migrant crisis right now,” the senator said.

Marshall said he’s done humanitarian work all over the world.

“I’m not bothered by a lot of things but just going to the detention center the first night, and again the Border Patrol doing everything humanitarian possible, but before they get their shower, before they brush their teeth for the first time in two weeks, before they’ve had food, before they get hydrated, it is absolutely a crisis to see two beautiful little girls ages six and eight on the river by themselves with their parents that paid the cartel to get them to this country,” he said.

“They gave him a phone number to call when they got here, being up about 100 miles north of here past a certain checkpoint, we found a young lady that was dying as well, dehydrated, so it is absolutely just riveting to see what people are going through,” the senator said.