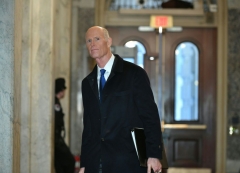 (CNSNews.com) - If Democrats continue to obsess over former President Donald Trump, it will be good for Republicans in next year’s midterm elections like it was for Glenn Youngkin in the Virginia gubernatorial race,” Sen. Rick Scott (R-Fla.) said Sunday.

“If you're a Republican, you want his endorsement, but you're going to win on the issues, and if you listen to Ron Klain and you listen to Phil Murphy, they didn't get it. What, what Americans are fed up with, they're fed up with inflation,” he said.

“They're fed up with their kids being indoctrinated in their schools, and they're fed up with defunding the police, and those are the issues that people care about, and so, I think this obsession with Donald Trump is going to be good for Republicans next year,” the senator said.

When asked whether Trump getting involved in open Senate primaries complicates his ability to recruit candidates that he thinks can win, Scott said, “Absolutely not. I believe Republicans ought to let the voters decide. I remember my primary in 2010, my opponent had every Republican endorsement in the country almost, and I won because I focused on the issue.

“So, I think you'd be foolish not to want and accept Donald Trump's endorsement, but you're going to win not because somebody endorses you. You're going to win because you focused on making sure inflation gets stopped, making sure people get a job, making sure your kids aren't indoctrinated on critical race theory, making sure we have safe communities. That's going to be the issues that people care about,” he said.

When asked whether Republicans will work with Biden if they win the majority in the Senate or whether there will be two years of gridlock, Scott said, “Well, I always say, ‘When we win,’ we're going to -- in '22, look, I want to work with Democrats, but here's what I want to do. I want to create the best economy we could ever have. We had a great economy under President Trump.

“I paid off a third of the state debt. I had record funding for education, for the environment, for transportation. Those are the things I want to do, but I'm not going to go, I’m not going to go, and I hope Republicans don't go down this path of wasting money because eventually it costs somebody money,” the senator said.

When asked whether it was a mistake for Republicans to support the bipartisan infrastructure bill, Scott said, “Well, everybody gets to make their own choice, but here's the way I looked at it. I like infrastructure. To me, that's roads, bridges, airports, and seaports. I spent $85 billion during my years as a governor, but guess what, I cut taxes and I also paid off a third of the state debt.

“That bill, remember how they promised it was going to be paid for? It wasn't. It wasn't paid for, and less than half of it dealt with roads, bridges, airports, and seaports. Let’s do a bill that’s real. We should do things and be honest what it is. Let's just do real infrastructure, and let's quit saying that we're not going to raise your taxes eventually because we have these deficits,” he said.

“Chuck, we almost have $30 trillion worth of debt. $30 trillion worth of debt. We have to hope to God that our interest rates never go up because it will never be paid for, and by the way, there's no conversation about how do you -- we've got to fix Medicare. We've got to fix Social Security to make sure they're funded and these programs can continue to last,” the senator said.

“The Democrats in D.C. and the Republicans continue to waste your money, and I'm going to, I’m going to oppose it all the way along,” Scott said.