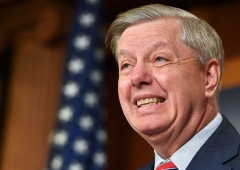 (CNSNews.com) - Sen. Lindsey Graham (R-S.C.) warned Sunday that if Republicans don’t fight back and support President Donald Trump’s efforts to investigate allegations of voter fraud, there will never be a Republican president again.

“The post office is now the new election center. It's the wild wild west when it comes to mail-in balloting. Everything we worried about has come true. So if we don't fight back in 2020 we're never going to win again presidentially a lot is at stake here,” Graham said in an interview with Fox News’s “Sunday Morning Futures.”

When asked to react to the media declaring former Vice President Joe Biden the next president, Graham said, “Well number one, this is a contested election. The media doesn't decide who becomes president. If they did you'd never have a Republican president forever, so we're discounting them.

“So, what happened? The Trump team has canvassed all early voters and absentee mail-in ballots in Pennsylvania, and they've found over 100 people they think were dead, but 15 people that we verified that have been dead who voted, but here’s the one that gets me. Six people registered after they died and voted. In Pennsylvania, I guess you're never out of it," he said.

“If Republicans don't challenge and change the U.S. election system, there'll never be another Republican president elected again. President Trump should not concede. We're down to less than 10,000 votes in Georgia. He's going to win North Carolina. We've gone from 93,000 votes to less than 20,000 votes in Arizona where there are more votes to be counted," Graham said.

"There are allegations of system failure, fraud. John James, do not concede. These computers in Michigan do not pass the smell test. Keep fighting for every legal and live vote," the senator added.

Host Maria Bartiromo asked Graham about a postal worker who has a sworn affidavit saying that supervisors were back-dating ballots.

The FBI is investigating it along with a postal inspector, and our committee will be talking to this gentleman. I don't know where that goes, but I do know that we have evidence of six people in Pennsylvania registering after they died and voting after they died, and we haven't looked at the entire system.

So to my Republican colleagues out there. We have to fight back, or we will accept our fate. I want Pennsylvania to explain to the American people how six people after they die can register and vote in Pennsylvania. I want the computer systems in Michigan that flipped votes from Republicans to Democrats to be looked at, and the software was used all over the country.

There's a lot of shenanigans going on here. If I were President Trump, I would take all this to court. I'd fight back, and from a Republican point of view, mail-in balloting is a nightmare for us. The post office is now the new election center. It's the wild-wild west when it comes to mail-in balloting. everything we worried about has come true. So if we don't fight back in 2020 we're never going to win again presidentially a lot is at stake here.

Graham sent a letter to Attorney General Bill Barr and FBI Director Christopher Wray saying that he received the affidavit from Richard Hopkins, the postal worker in Erie, Pa.

When asked what he’s going to do with the evidence and what he’s expected the Justice Department to do, Graham said, “Well they already talked to him. I know that, and we'll try to interview the gentleman. That's an allegation. We'll see if it withstands scrutiny. I know we got evidence of dead people voting in Pennsylvania.

“I know we have evidence of computers flipping Republican votes to Democratic votes. There's a lot of things being alleged out there that need to be looked at. The media could give a damn how Trump loses as long as he loses. They declared Biden the winner. They'll never take any of this stuff seriously. They just shut out all Crossfire Hurricane Oversight,” he said.

“The bottom line is we can't let the media run America. We have to fight back. We have to go to court. We have to hold the people's feet to the fire in these states, and statistically, Biden got more votes than Obama in a few areas of the country and only in a few areas. How could that be?” the senator asked.

“Why did he get more votes than Obama in areas that mattered, that decided the election and not other parts of the country? There's so much to be looked at, and I'm hell-bent on looking at it. Do not accept the media's declaration of Biden. Fight back,” he said.

Graham said Trump is the MVP for the congressional races in 2020.

“He helped us all, so the bottom line is, House Republicans have increased their majority. They can slow down the radical agenda coming out of the House, but Senate Republicans can kill it and stop it. If we pick up these two Republican seats in Georgia, we have the ability to stop the most radical agenda in the history of the United States. Kevin Mccarthy can slow it down,” he said.

“Mitch McConnell and Lindsey Graham and others can stop it only if we win Georgia. We have to win these two seats in Georgia. I'm confident that we will. To the people of Georgia, the future of America is in your hands. Do you want to socialize America? If you don't, speak up and support our Republican candidates. Checks and balances are needed now more than ever,” the senator said.

Graham pledged to stop any progressive plans that come to him in the Senate, including voting no to $4.3 trillion in tax increases and the Green New Deal.

“You can take it to the bank. I ran on it, and I won overwhelmingly being an impediment, a block to the most radical domestic agenda in the history of the country. We will kill it dead in the Senate if you give us the majority. We will work with Biden if he wins, but Trump has not lost. Do not concede, Mr. President. Fight hard,” Graham said.