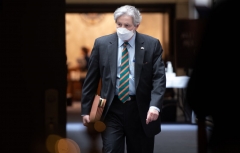 Senator John Kennedy, Republican of Louisiana, wearing a mask to protect himself and others from COVID-19, known as coronavirus, leaves following the weekly Republican policy luncheon on Capitol Hill in Washington, DC, May 5, 2020. (Photo by SAUL LOEB/AFP via Getty Images)

(CNSNews.com) - Sen. John Kennedy (R-La.), asked to react to Sen. Debbie Stabenow’s (D-Mich.) claim that Judge Amy Coney Barrett will be a vote against Obamacare, told “Fox News Sunday” that the Democrats think the Supreme Court should be a mini Congress, “politicians without robes” who “don’t even need to hear cases.

“Senator Stabenow is my colleague, and I consider Debbie a friend, so I say this gently, sell crazy somewhere else, we're all stocked up here. Unless Debbie is clairvoyant, I don't think she knows how the nominee is going to vote or any other member of the United States Supreme Court,” Kennedy said.

“But Debbie makes the point the difference between Democrats and Republicans, in terms of the role of the Supreme Court. My Democratic friends think the Supreme Court ought to be a mini Congress. They're politicians without robes. They don't even need to hear cases. They already know how they're going to vote, and that's part of the problem,” he said.

“That's not how I view the appropriate role of the Supreme Court, and I don't think that is how it operates,” the senator said.

“To Debbie and my colleagues in the Senate. I hope they let us have a respectful process. We don't need another freak show. I mean, I hope they won't get into the foothills of kinky and bring back Michael Avenatti and all that other stuff. Let us focus on the nominee,” he said.

When asked to respond to accusations by Democrats that Republicans are being hypocritical in pushing for a vote on Judge Amy Coney Barrett before the election, Kennedy said, “I'm rather fond of the Constitution. I have read it. Its provisions about filling a Supreme Court vacancy are unaffected by the electoral calendar.

“I realize that on both sides, Brit, there's been a lot of circumlocution and attempted Churchillian rhetoric about the president to be followed during an election year to fill a vacancy. Here's as best as I can tell, here's the rule. When the Democrats are in charge of the process, they do what they think is right, consistent with the Constitution,” he said.

“When the Republicans are in charge of the process, they do what they think is right, and I think that's what our founders intended. I think our founders intended elections to have consequences and when they send people to Washington of a particular party, they expect them to represent their voters, and I think that's been the tradition and the precedent,” Kennedy said.

Host Brit Hume asked the senator to acknowledge that “what we have here is a serious case on both sides on this issue of shoe on the other foot disease.”

“Right now we have a Republican president. We have a Republican Senate. If that shoe were on the other foot, then I can assure you Senator Schumer would do what the Republicans are doing right now. As I said the other day, if you don't believe that, you probably peaked in high school,” he said.

“If my Democratic friends want to turn it into an intergalactic freak show and bring back the protesters with the genitalia shaped head gear, I can't stop them. I just hope they won't. I'm going to do my job. I think she's a good nominee, but my job is to advise and consent. I'm going to probe her intellect, her temperament, her judicial philosophy, her character. I want to be assured that she doesn't think justices are politicians in robes,” Kennedy said.

“I want to be assured that she's not one of these justices that tries to rewrite the Constitution every other Thursday to advance a political agenda that the voters won't accept,” the senator said.