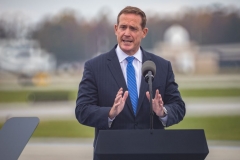 (CNSNews.com) - Rep. Ted Budd (R-N.C.), who serves on the House Financial Services Committee, said Wednesday that the Democrats’ proposal requiring banks to send IRS information on bank accounts with total annual deposits or withdrawals over $10,000 is not much better than the original proposed $600 threshold.

“The proposal will affect almost every single American. Not just average Americans but the vast majority of Americans have accounts that will go through $601, and if they raise it to $10,000, it'll still capture everybody and every small business, and you have to ask yourself for what purpose,” he told Fox Business’ “Mornings with Maria Bartiromo.”

When asked to explain exactly what is captured with the $10,000 number, Budd said, “Well, essentially everything. It's a giant dragnet.

“It weaponizes your local community bank, your credit union, the big banks, the small banks, and it's essentially to pay for the socialist agenda that the Democrats are proposing right now - whether it's $3 and a half trillion or $6 trillion or $1.2 trillion, whatever the number is, they gotta find a way to pay for it, which is very suspicious since Joe Biden says it cost zero and now they’re weaponizing the IRS against the American people,” he said.

The congressman said that “If a parent pays for a semester of college or pay for new roof on their house, they are now suspicious, according to the IRS, and it's forcing these local banks to report this activity.

“Essentially it models itself after the (SAR) or the suspicious activity report for $10,000 or more cash withdrawal. The threshold was $6,000. There was so much backlash against that. They didn’t change the principle, but what they did is they changed the amount, which is the same problem,” he said.

When asked what he thinks it will take for Democrats to get the “human infrastructure” reconciliation bill passed, Budd said, “It's never enough to pay for the Democrats' radical socialist agenda. They want to spend $80 billion more for the IRS to weaponize it against the American people for things that we talked about, the $10,000 threshold or the $600 threshold.

“I mean, this is not what we were facing under President Trump a couple of years ago. We were getting more free and more prosperous, the average everyday person's wages were rising, and now look at where we are in total Democratic control,” the congressman said.

Budd predicted that “it’s only the beginning.”

“They talk about freedom but what they want to do is take them away. They want to move us towards, they want to grind down and guideline down what's exceptional about our country. The whole thing that President Trump was doing was making us more free, making us great, but right now what we’re seeing is the grinding down, the modeling after a European socialist state,” he said.