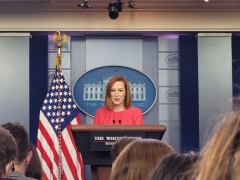 (CNSNews.com) - White House Press Secretary Jen Psaki refused to say Thursday whether the former commander of U.S. troops in Afghanistan, Gen. Scott Miller, recommended to President Joe Biden that he leave 2500 troops in Afghanistan instead of a total troop withdrawal.

“I want to get to the hearing on the hill with General Miller. The president told ABC back in August that none of his generals recommended leaving 2500 troops in Afghanistan. General Miller told the Senate Armed Services Committee that that was exactly what he recommended. Was the president’s answer in that interview an honest answer?” Fox News White House Correspondent Jacqui Heinrich asked.

“First of all, I’m not going to get into details of private advice that the president gets from his national security team or military advisers,” Psaki said.

“What is clear is that the president asked for, welcomed candid and non-sugar coated advice on Afghanistan and what we should do given what we walked into, which was a deal struck with the Taliban with a May 1st timeline, including the release of 5,000 Taliban fighters where we would need to get our U.S. forces out otherwise face consequences. That’s what he was facing,” she said.

“In terms of the mechanism of who provided what advice through what forum, I’m just not going to get that level of detail from here,” the press secretary added.

“Did the president hear specifically the recommendation from the commander on the ground in Afghanistan that he feared that a full withdrawal would be devastating and should not happen?” Heinrich asked.

“He was provided a range of advice. I’m just not going to get into more details than that, but what’s important to note at this point is it’s crystal clear that 2500 would not have been sustainable on the ground,” Psaki said.

“We heard enough to know that there are inconsistencies between what the administration has said and the truth,” Inhofe said. “Clearly, President Biden didn't listen to all the military advice given.”