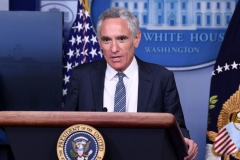 The only thing that changed, he said, was who the president is.

Amazon contacted the Biden administration just after President Joe Biden was sworn in, offering to leverage its operations and asking for its employees to be inoculated "at the earliest appropriate time."

During an interview with Fox News’s “The Story with Martha MacCallum” on Thursday, Atlas noted that Amazon CEO Jeff Bezos, who owns the Washington Post is friendly to the Democratic cause.

“I think it’s pretty bad. If they had this capability they should have shared it with the Trump administration,” he said.

Host Trace Gallagher noted that Bezos was no fan of Trump, and he asked whether America would be better off today if Amazon had made the same offer to the Trump administration a month ago.

“Well, I hate to predict like that, but I can say this: It is disgusting, despicable, vile for people to let people die in this country for political reasons. We see it potentially as that. We also saw it when this administration that came in cast doubt on the safety of the vaccine. Why don't we hear that anymore?” Atlas said.

“The vaccination program and the vaccine was very safe. No corners were cut. We kept saying that, and the people in this administration at the highest levels made people insecure about the safety. When you undermine public confidence in something as critical as a life-saving vaccine, I don't know how to describe something like that, but I'll use one word. It is absolutely heinous. It’s sinful to do that,” he said.

“So I'm glad to hear President Biden call for unity. I’m glad to have him actually physically state it’s important to have trust in our healthcare system. It's sad and really disgusting that so many people intentionally undermined the confidence in this vaccination, which now they are rushing to prioritize. Nothing changed except who is in charge politically,” Atlas said.

Biden announced his national strategy to combat COVID on Thursday.

Atlas said it should not take three months to vaccinate people in the high risk group.

“It's great to focus on two of the things he focused on, which is of course getting people vaccinated. By that, I mean the people who want to be vaccinated, but I think there's something more, which is it should not take three months to vaccinate the high-risk people and the people who have the priorities, and I don't hear that. I don't see that being done in the country,” he said.

“The country is run at the state level by the governors, and there's only one or two states that have given more than half of their vaccines to people who are actually high risk, meaning the elderly and people with chronic conditions, which is bizarre. He should have emphasized that,” Atlas said.

“Secondly, we can easily open up the country by vaccinating the people at risk and also having people who have had the infection step aside as the first priority because they have - whether people want to admit it or not - biological protection from the infection,” he said.

“We don't throw out everything we know about biology that you learn in AP Biology in high school about, you know, immunology, so you could easily very efficiently open up … by getting the high risk people vaccinated,” Atlas said.

“The second thing he emphasized … was the opening of the schools, which I think is absolutely essential. The problem that he and others repeatedly fail to understand, let alone state, is that the schools are low-risk environments. It's proven children don't have a high risk for significant disease. It’s proven that they don't significantly spread to the high risk people like teachers,” he said.