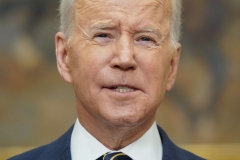 President Joe Biden speaks about trade with Russia, from the Roosevelt Room of the White House in Washington, DC, on March 11, 2022. - Biden says US and allies will revoke Russia's favored trade status.(Photo by MANDEL NGAN/AFP via Getty Images)

“The second big reason for inflation is Vladimir Putin. From the moment he put his 150,000 troops on the Ukrainian border, the price of gasoline in January went up 75 cents, and Putin began amassing troops along the border, and guess what? The world took notice. Those of you who work in the business know that the market anticipated it. The price went up more, and then Putin invaded. Make no mistake. Inflation’s largely the fault of Putin,” Biden said.

“I love -- you know the Republicans say it’s Biden’s gas pipeline. Biden said he’s going to stop the Keystone Pipeline, and I did, and that’s the reason prices went up. Folks, let’s get something straight here. The Keystone Pipeline was two years away. It had been two percent finished. Give me a break,” the president said.

Biden held up two newspaper articles to illustrate his point.

Headline: Fact Checker in The New York Times: ‘Republicans Wrongly Blame Biden for High Gas Prices.’ Then it goes on to explain why gas prices are so high. Washington Post Op-ed by Dana Milbank. ‘Opinion: Biden Heeded Republicans Plea to Ban Russian Oil. They Pounced.’ It goes on to talk about why it’s not--- Don’t let anybody tell you anything you did supporting the idea that we block Russian oil coming into the country, which is gon--- and I said at the time, prices are going to go up for gasoline,” he said.

“It wasn’t anything we did, and by the way, you are in a situation now where if you take a look, the idea can we pump more oil? There are now 172 gas and oil rigs running. Now we have—there are 519 in operation before this all began. But guess what? They have over 7,000 permits to dig oil if they want. Why aren’t they out pumping oil? Because they’ve said and very clear--- Wall Street bankers have made it very clear. Not a joke. Check it out,” the president said.

“I recommend these two articles to you just a little bit of a primer. You probably know it. What’s happened? Well the oil companies and the executives, they don’t want to pump more oil, although they have every capacity to do so. Nothing is slowing them up from doing it if they want to. Why? Rather than spend the profits of the increased price of gasoline, they would rather take those profits and buy back stock, buy back their own stock, rather than take that money and invest it in pumping new oil. Not a joke,”  Biden said.

“So don’t tell me gas prices rose because I‘ve slowed down the American energy production. In my first year in office, American production grew by 9.7 million barrels today to 11.6 million while we still made a major, major effort to deal with global warming and changing the way in which we shift to renewable energy,” the president said.