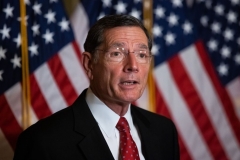 (CNSNews.com) - Sen. John Barrasso (R-Wyo.) warned Thursday that it is considered fraud for Democrats to encourage people to move to Georgia just to vote for Democratic senatorial candidates Jon Ossoff and Rev. Raphael Warnock in the run-off elections and then leave the state.

“It is fraud to have people move to Georgia, register to vote, vote, and then leave. If people are planning to make it their home, and the law is pretty clear on that, then they are eligible to vote, but it sounds like the Democrats are recruiting people, and you just saw Tom Friedman of The New York Times saying, ‘Move down and then leave," Barrasso said in an interview with Fox News’s “Outnumbered Overtime with Harris Faulkner.”

"That is against the law, and we’re going to have lawyers working on that to prevent that, but people across America need to know, they do that, they're going to be prosecuted to the fullest extent of the law,” he said.

Host Harris Faulkner noted that former Democratic presidential candidate Andrew Yang announced on Twitter that he and his wife are moving to Georgia to help Ossoff and Warnoff win.

“This is our only chance to clear Mitch out of the way and help Joe and Kamala get things done in the next 4 years,” Yang tweeted on Nov. 7.

Yang later explained, “To be clear I am heading to Georgia to get out the vote, canvas, knock on doors and let people know how important the special Senate races are. I do not plan on voting myself - I already cast a vote in NY. On to Georgia!

Barrasso said that the future of America is on the line in Georgia and that Sens. David Perdue (R-Ga.) and Kelly Loeffler (R-Ga.) are trying to save America.

“You saw Chuck Schumer ranting, saying, ‘First we take Georgia, then we change America.’ Harris, Republicans and those two candidates, they are trying to preserve America, save America from those radical, extreme, dangerous, scary approach of the Democrat candidates across the board, the progressives that you talk about,” Barrasso said.

“People want pretty simple things. They want safe neighborhoods. They want affordable energy. They want to get back to work, and that’s what David Perdue and Kelly Loeffler are fighting for,” the senator added.

Barrasso expects Trump “to be actively engaged in helping fight against this hard left turn” that the Democrats are trying to promote.

“I mean they are wrong on all the issues, whether it's guns, abortion, immigration, taxes, the Democrats are just plain wrong. You don't want Bernie Sanders as secretary of labor. That ought to scare people. Elizabeth Warren as secretary of treasury? The former governor candidate in Georgia, Stacey Abrams, listed for attorney general? I mean, that's enough to scare the life out of anyone. We need to help these two candidates win these seats in Georgia - the Republican seats,” he said.

Meanwhile, Sen. James Lankford (R-Okla.) said former Vice President Joe Biden should be able to receive intelligence briefings by the end of the week or Lankford will act. Biden has yet to be certified as the winner of the presidential election, and President Donald Trump has launched legal challenges in several states.

Barrasso said Lankford just wants to make sure that everything is done according to the law.

“They stopped, and I think it is important that both continue to get those briefings, until the electoral college makes its final determination, and I know that James wants to make sure the law is being followed properly,” he said.