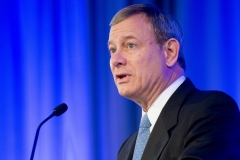 The Supreme Court is expected to rule this week on an abortion case that is similar to a 2016 case in which Chief Justice John Roberts sided with the conservative minority on the court,  Justices Clarence Thomas and Samuel Alito. Given the similarities in the two cases, court-watchers are anxious to see if Roberts will side with the liberal wing of the court, like he did in two major rulings last week, or if he will stick to his earlier reasoning.

The case being decided, June Medical Services v Russo, concerns a Louisiana state law, Act 620.  The law passed in 2014 and it requires that, “a physician performing or inducing an abortion shall: ‘have active admitting privileges at a hospital that is located not further than thirty miles from the location at which the abortion is performed or induced.’”

Several abortion clinics and doctors challenged the Act, which has driven the matter all the way to the Supreme Court.

June Medical Services v. Russo closely mirrors Whole Woman’s Health v. Hellerstedt, from 2016, which concerned the Texas legislature’s House Bill 2 (HB 2). Similar to the Louisiana state law, HB 2 required that a physician performing an abortion have admitting privileges at a hospital within 30 miles, and that the abortion clinic met the same medical standards as an ambulatory surgical center.

In the Texas case, the Supreme Court ruled 5-3 in favor of Whole Woman’s Health by applying the “undue burden” test. Liberal Justices Kennedy, Ginsburg, Breyer, Sotomayor, and Kagan made up the majority opinion, while Chief Justice John Roberts and the conservative Justices Thomas and Alito dissented.

Since 2016, with the confirmation of Justice Neil Gorsuch and Brett Kavanaugh, the Supreme Court has become more conservative on some issues and more liberal on others, with Roberts often being the “swing vote.”

June Medical Services v Russo is first major abortion case under the new court, so the decision is being closely watched. The ruling seems contingent, in part, on the decision of Chief Justice Roberts who, last week, surprised conservatives by siding with the liberals on the court over civil rights and DACA.

Gorsuch also sided with the liberals last week in ruling that the word “sex” in Title VII of the 1964 Civil Rights Act does not just apply to male or female but also transgenders and gender identity.

The Heritage Foundation, a conservative think tank, offered an opinion on June Medical Services v. Russo, stating, “Louisiana acted to prioritize women’s health over the abortion industry’s business interests. Abortion is a serious, life-altering procedure. Abortionists should not be able to claim to represent women’s best interests while simultaneously seeking to eliminate protections for the women they claim to speak for.”

The Center for Reproductive Rights (CRR) is a pro-abortion group that has closely followed this case. CRR President Nancy Northrup called on the high court to look to the Texas ruling as precedent, saying, “Louisiana is openly defying the Supreme Court’s decision from just three years ago, in which they found an identical Texas law unconstitutional. We are counting on the court to follow its precedent.”