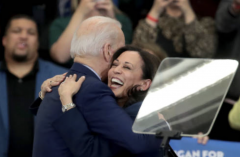 Biden’s idea is laid out in a part of his campaign website that is enitled “The Biden Plan to End to End Violence Against Women.”

A section of this plan says it will: “Create Regional Sexual Assault Investigative Training Academies.”

“There is still a striking lack of investigative training for law enforcement and prosecutors in units dedicated to sex crimes despite the extreme complexities of sexual assault investigations,” says this section of Biden’s plan.

“Biden will invest $20 million per year,” it says, “in creating Regional Sexual Assault Investigative Training Academies which will provide cutting-edge, evidence-based and trauma-informed training on investigating and prosecuting sexual assault crimes and offer incentive grants for teams of law enforcement, victim advocates, and prosecutors all over the United States to attend.”

This is a screen capture from "The Biden Plan to End Violence Against Women.'