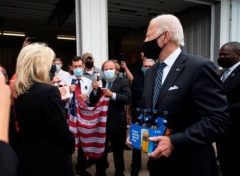 Joe Biden hand over a six pack of local beer, Iron City, as he delivers beer to the Shanksville Volunteer Fire Company in Shanksville, Pa., Sept. 11, 2020. (Photo by Jim Watson/AFP via Getty Images)

(CNSNews.com) - Former Vice President Joe Biden not only does not drink, he has never had a drink in his life, according to a documentary that has been produced by CNN.

“I don’t drink at all,” Biden says in the documentary, according to a report in Politico.

“I’ve never had a drink in my life,” Biden says in a interview with CNN’s Gloria Borger, “but I remember taking out a fifth of, I think it was gin, and put it on the kitchen table. But I couldn’t even make myself take a drink. What saved me was really my boys.”

In a 2019 story, CNN described Biden as “a teetotaler who sometimes breaks into a trot before the cameras to showcase his fitness.”

In 2007, the Atlanta Journal-Constitution described him this way: “A teetotaler, Biden has never kept an apartment in Washington, as most members of Congress do, but commutes each morning by Amtrak from his Wilmington, Del., home.”