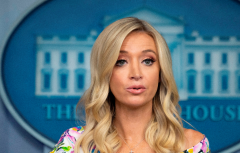 (CNS News) --  White House Press Secretary Kayleigh McEnany told reporters not to use science to further their political agendas, noting that some “health experts” had said it was basically fine for people to participate in Black Lives Matter protests but that churches should be closed and religious people should not gather to supposedly prevent the spread of coronavirus.

McEnany responded that the president was unhappy about how the CDC continued to release guidelines prematurely, which mislead citizens when they are released “not in their fullest form and their best form.”

McEnany then addressed how Black Lives Matter protesters were allowed to gather in large groups but many churches and religious worshipers were not. She urged reporters not to use the virus for political gain.

“[W]hen we use science, we have to use it in a way that is not political,” she said. “When you had 1,300 health experts sign a letter not to condemn large crowds of protesters, but some [of the] same health experts say churches need to stay shut down.”

Apparently, “lockdown protests somehow don’t get the same First Amendment rights as the protest that we saw on our streets,” she added, “we need to use science, lean into science, but not use it and cherry-pick it to fit whatever particular political persuasion is.”

The reporter then asked, “So he [Trump] has confidence in the CDC?”

“He does,” McEnany said.

Later in the briefing, McEnany was asked why there was still a travel ban on European countries when the United States has more reported cases than Europe.

McEnany said, “The argument is, we will always put America first.”