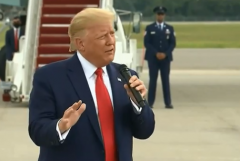 (CNSNews.com) - The way the liberal media described it, President Donald Trump on Wednesday urged Americans to vote twice, which would be illegal.

Trump urged people using the mail-in system to "Follow your ballot" to make sure it counts, and if it doesn't, vote in person.

Trump, speaking at the airport in Wilmington, N.C., was making the point that you can't trust mail-in ballots to be counted, or "tabulated."

On your ballots -- if you get the unsolicited ballots -- send it in, and then go make sure it counted. And if it doesn't tabulate, then you vote -- you just vote.

And then if they tabulate it very late, which they shouldn't be doing -- they'll see you voted, and so it won't count. So send it in early, and then go and vote, and if it's not tabulated, you vote. And the vote is going to count.

So if you have an absentee ballot, or as I call it, a solicited ballot -- you send it in. But I would check it, in any event. I would go and follow it. And go vote. And everybody here wants to vote.

In a separate conversation with a North Carolina reporter, President Trump said much the same thing:

CNN's Wolf Blitzer on Wednesday read Trump's remarks to Attorney General William Barr: "He said -- and I'm quoting him right now, 'So let them send it in and let them go vote, and if the system is as good as they say it is, then obviously they won't be able to vote.' That sounds like he's actually encouraging people to commit a crime, to vote twice."

"Well, I don't know exactly what he was saying," Barr responded. "But it seems to me what he's saying is -- he's trying to make the point that the ability to monitor the system is not good, and if it was so good, if you tried to vote a second time, you would be caught."

Blitzer interrupted, "If somebody mailed in a ballot and then actually showed up to vote in person, that would be illegal...You can't vote twice."

"Well, I don't know what the law in this particular state says, and when that vote becomes final," Barr said.

"He was saying, test the system," Blitzer tried again.

"Wolf, this is a sort of cheap talk to get around the fundamental problem, which is the Bipartisan Commission chaired by Jimmy Carter and James Baker said back in 2009 that mail-in voting is fraught with the risk of fraud and coercion," Barr said.

"And since that time, there have been, in the newspapers, in networks, academic studies saying it is open to fraud and coercion. The only time the narrative changed is after this administration came in.

"But elections that have been held with mail have found substantial fraud and coercion. For example, we indicted someone in Texas, 1,700 ballots collected, he -- from people who could vote, he made them out and voted for the person he wanted to. OK?"

Trump: 'MAIL-IN BALLOTS WILL BE PRINTED BY FOREIGN COUNTRIES'

Pelosi: 'We Do Want to Have Vote-by-Mail,' It 'Removes the Obstacles to Participation'