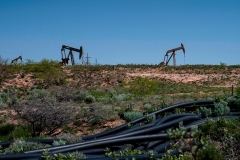 Oil production in Eddy County, New Mexico, where Permian Basin Crude oil extraction is one of the main economic drivers of thes area. (Photo by PAUL RATJE/AFP via Getty Images)

"By the way, I have a transition from the oil industry, yes," Biden told Trump.

"I will transition. It is a big statement," Biden agreed. "Because I would stop--"

"Why would you do that?" moderator Kristin Welker asked Biden.

"Because the oil industry pollutes, significantly," Biden told her.

'Russia and China and India are happy'

He’s never said that before. We know he's going to try to change his position on fracking because it will destroy his campaign in Pennsylvania. That’s not the issue. The issue is, Joe Biden publicly said tonight we are going to do away with the oil and gas industry in this country by 2035 at the latest.

And if you’re in the oil and gas industry tonight, you need to be worried. You better take every friend you’ve got and called them tonight and tell them to vote for Donald Trump because if you don't, you're going to lose your job in the next decade or less.

Graham said Biden's comment on the oil industry has changed the dynamic of the race:

"I think the big story tonight is that Pennsylvania is gone for the Democrats and Ohio is in a much better position after tonight's debate. I cannot tell you how important it is to understand that the man seeking the highest office in the land, vice president Joe Biden -- wanting to be your president -- will destroy the oil and gas industry.

"That will make everybody in the Mideast very happy, make Russia and China very happy, it's going to destroy millions of lives in the United States for no higher purpose. It shows you how radical this agenda is -- they own Joe Biden. The truth came out tonight, the people in charge of the Democratic Party are AOC and the extremists, not Joe Biden."

"He takes everything out of context," Biden said about Trump, "but the point is, look, we have to move toward net zero emissions. The first place to do that by the year 2035 is in energy production, by 2050 totally."