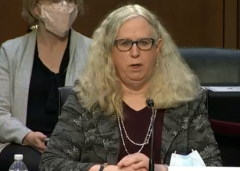 Dr. Rachel Levine is an American pediatrician who served as Secretary of the Pennsylvania Department of Health from 2017 to 2021 and is now nominated to serve as President Biden's assistant HHS secretary. (Photo: Screen capture)

(CNSNews.com) - Unafraid to address the transgender issue staring lawmakers in the face, Sen. Rand Paul (R-Ky.) on Thursday asked Dr. Rachel Levine (nee Richard) if she believes "minors are capable of making such a life-changing decision as changing one's sex."

Well, Senator, thank you for your interest in this question. Transgender medicine is a very complex and nuanced field.  We have robust research and standards of care that have been developed, and if I am fortunate enough to be confirmed as the assistant secretary of health, I will look forward to working with you and your office and coming to your office and discussing the particulars of the standards of care for transgender medicine.

Paul followed up: "The specific question was about minors. Let's be a little more specific, since you evaded the question.

"Do you support the government intervening to override the parent's consent to give a child puberty blockers, cross-sex hormones, and/or amputation surgery of breasts and genitalia? You have said that you're willing to accelerate the protocols for street kids.

"I'm alarmed that poor kids with no parents who are homeless and distraught -- you would just go through this and allow this to happen to a minor."

Paul mentioned the case of gender-confused girl, now 23, who ended up transitioning to the opposite sex and lived to regret it.

“Let it go into the record that the witness refused to answer the questions,” Paul said.

Paul noted that for most of the history of medicine, minors couldn't even get a cut sewn up in the emergency room without parental permission. "But you're willing to let a minor take things that prevent their puberty. Do you think they get that back?” Paul asked.

“There's no long-term studies. We don't know what happens to them. We do know that there are dozens and dozens of people who have been through this who regret that this happened, that a permanent change happened to them.”