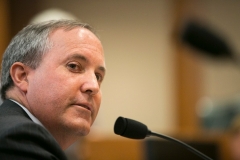 (CNSNews.com) - Amid blistering criticism, Texas Attorney General Ken Paxton is defending the right of Texas voters to at least have their case heard in the U.S. Supreme Court, the only court that can hear the case.

Paxton is leading a lawsuit against four swing states on the grounds that unconstitutional changes in their voting laws impacted the constitutional rights of Texas residents.

Eighteen other states are supporting the Texas case by filing friend-of-the court briefs.

Appearing on Fox News Thursday night, Paxton was asked if he thinks the Supreme Court will actually take up the case, which has been placed on its docket:

"You know, I don't know what's in their head," Paxton said. "But what I'm hoping is that, we don't have another place to go -- this is a state versus state (issue), so our direct action, our first action, is in the U.S. Supreme Court.

The Texas lawsuit asks the court to either delay the four states from voting in the Electoral College until the case is decided; Or, if the court quickly reaches a favorable decision on the merits of the case before Dec. 14, it should remand election certification to the (Republican) legislatures of those four states, a move that likely would make Trump the next president.

'Affront to principles of constitutional democracy'

The novel and far-reaching claims that Texas asserts, and the breathtaking remedies it seeks, are impossible to ground in legal principles and unmanageable. This Court has never allowed one state to co-opt the legislative authority of another state, and there are no limiting or manageable principles to cabin that kind of overreach. If this Court were to entertain Texas’s attack on Georgia’s sovereignty, it would trample the “historic tradition that all the States enjoy equal sovereignty,”

The base of Texas’s claims rests on an assertion that Michigan has violated its own election laws. Not true...If the Court issues the injunction Texas requests, it will upend the statutory process for the selection of presidential electors. Moreover, it will disenfranchise millions of Michigan voters in favor of the preferences of a handful of people who appear to be disappointed with the official results.

Texas proposes an extraordinary intrusion into Wisconsin’s and the other defendant States’ elections, a task that the Constitution leaves to each State. Wisconsin has conducted its election and its voters have chosen a winning candidate for their State. Texas’s bid to nullify that choice is devoid of a legal foundation or a factual basis. This Court should summarily dismiss the motion to file the bill of complaint.

Since Election Day, State and Federal courts throughout the country have been flooded with frivolous lawsuits aimed at disenfranchising large swaths of voters and undermining the legitimacy of the election. The State of Texas has now added its voice to the cacophony of bogus claims. Texas seeks to invalidate elections in four states for yielding results with which it disagrees. Its request for this Court to exercise its original jurisdiction and then anoint Texas’s preferred candidate for President is legally indefensible and is an afront (sic) to principles of constitutional democracy.

So this is a really big issue. This is a constitutional, fundamental issue of how our democracy works. Each of these states under the Constitution is given the responsibility by the legislature to set their rules and regulations as it's going to relate to their elections.

These states did not follow that. They had individual counties and local officials making the decisions that were given power by the Constitution's -- the legislature was given that power. They didn't follow it.

Paxton said he's hoping for quick action by the Supreme Court, "because I think America needs to get this resolved as quickly as possible. And we just want the opportunity to have our arguments heard, because we think they are good arguments, their based on the Constitution, and we think it's fair for all Americans to have this done well and to have it done soon."