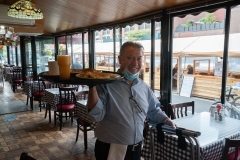 A waiter delivers food to a table at as New York City restaurants open for limited-capacity indoor dining on October 1, 2020. (Photo by BRYAN R. SMITH/AFP via Getty Images)

(CNSNews.com) - As more of the nation's economy opens amid the coronavirus pandemic, the September employment shows a fifth straight month of progress, but it's meager progress at best.

The Labor Department's Bureau of Labor Statistics defines an unemployed person as someone who does not have a job, has actively looked for work in the prior 4 weeks, and is currently available for work." If you drop out of the labor force, you’re no longer counted as unemployed.

(The lowest this number has been under President Trump is 94,279,000 in April 2017. BLS notes that this number has been steadily increasing in recent years as more baby boomers retire, and certainly the COVID-related business closures have accelerated the increase as more people drop out of the workforce.)

Contrast the September jobs report with that of February, when the United States recorded its first death from coronavirus.

BLS said the economy added 661,000 jobs in September, following four months of million-plus jobs added. In September, notable job gains occurred in leisure and hospitality, in retail trade, in health care and social assistance, and in professional and business services. Employment in government declined over the month, mainly in state and local government education.

In September, the civilian non-institutional population in the United States was 260,742,000. That included all people 16 and older who did not live in an institution, such as a prison, nursing home or long-term care facility.

Of that civilian non-institutional population, 160,143,000 were participating in the labor force, meaning they either had a job or were actively seeking one during the last month. This resulted in a labor force participation rate of 61.4 percent in September, a deterioration from the 61.7 percent in August, and well below the Trump-era high of 63.4 percent set this past January and February.

At a rally in Duluth, Minnesota on Wednesday, President Trump reminded his supporters that before coronavirus came to this country, "You had the best year you’ve ever had. The year before that, you had the best year you’ve ever had until the following year, and we’re doing it again, we’re building it up rapidly. ...We built the greatest economy in the history of the world, and now we are quickly doing it again. We’ve added a historic 10.6 million jobs in the last four months. That’s a record the likes of which has never even been close to being challenged."

"You know, we did something great. We had the greatest economy in history, and we had to close it down because we would have lost millions of lives, and now we’re opening it up, and we’re doing it at a level like nobody’s ever seen before, and it’s a great thing, and we’re going to be back in business very soon, except for some Democrats," Trump continued.

"And they’ll all open up. They’re going to all open up right after November 3rd. They’ll announce, “We’d like to tell you that we’re all opening up November 4th.” Did you see the one group that said, “We’re opening up right after the election, I think we’ll open up.” That’s great. These are terrible people because they’re more interested in politics than they are in the lives of people..."