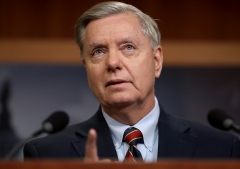 “If we don't get 52 Republicans in the Senate, the Democrats are going to change our country to the point you won't recognize it. …the radical agenda that they are proposing for our country, it can only be stopped if we get Georgia right. We've got to win in Georgia.”

Graham spoke after Sidney Powell and Lin Wood – two attorneys working on behalf of President Donald Trump – said “all Georgians” should sit out the Jan. 5 runoff unless changes are made to Georgia’s voting system:

“I would encourage all Georgians to make it known that you will not vote at all until your vote is secure – and I mean that regardless of party,” Powell said. “So we must have voter ID, and we probably must go back to paper ballots that are signed and have your thumbprint on them. We certainly should be able to find a system that can count them, even if it has to be done by hand.”

Attorney Lin Wood, like Graham, wants Georgia Gov. Brian Kemp to call a special session of the state legislature to make changes, and he said the two Republican candidates should demand it:

“We’re not going to go vote on January 5th on another machine made by China,” Wood said.

Graham says signature matching on absentee ballots in Georgia should be done in a bipartisan way in election offices, but that’s something the state legislature would have to require:

In Georgia, a mail-in ballot, signature verification is done by a single individual in a county office. If they have a problem with the signature, they will call somebody above them. And if there's a dispute, they will go to a third person. But in Fulton County, where Biden got 80 percent of the vote, I think they had 11 signatures rejected.

In the database they are using, this consent decree entered into by the Secretary of State with Stacey Abrams…has really put us behind the eight ball.

Graham said he’s “begging the governor to call the legislature back in session” to make signature checks bipartisan. “That is the simple fix. If you do that, you're probably going to save Loeffler and Perdue from a lot of fraud.”

Graham said Gov. Kemp “seems like a decent fellow,” but he’s not “proactively fixing the system. We know that the mail-in voting system in Georgia needs to be reformed. And we've got days to fix it, not months.”

Gov. Kemp has given no indication that he will call a special legislative session before the runoff election.

Graham said, “We've got nobody to blame but ourselves, if we sit on our ass and continue to allow the system to exist. So -- like the governor, he's a fine fellow, but he needs to change the law before it is too late so we don't get cheated out of these two Senate seats.”

“The Statehouse in Georgia can change state election law in Georgia, I can't. Federal judges can get relief, I can't. Go to court with a case that makes sense, change the law where you can to require bipartisan signature verification.

“I'm not trying to tip it to Republicans -- I'm trying to prevent Republicans from being cheated by a system that is ripe for fraud.”