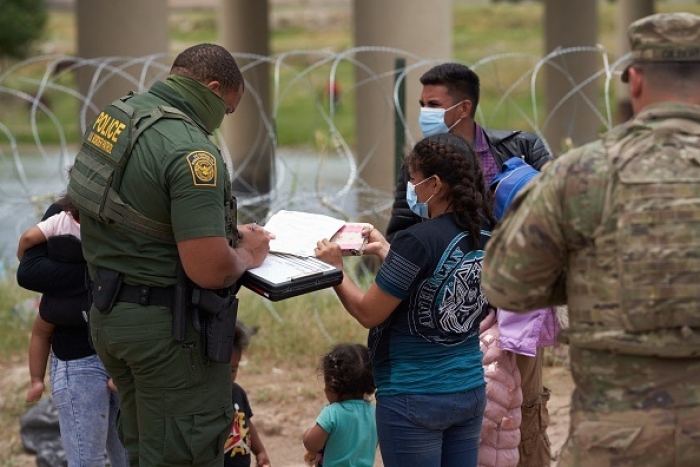 Migrants are apprehended by US Border Patrol and National Guard troops in Eagle Pass, Texas, on May 22, 2022. (Photo by ALLISON DINNER/AFP via Getty Images)

Customs and Border Protection agents recorded 239,416 "encounters" of illegal aliens at the Southwest border in May, a monthly record, based on 22 years of Border Patrol record-keeping.

The May number exceeds the previous monthly southwest border record set in April (235,478) by 2 percent.

CBP notes that of those 239,416 encounters along the southwest land border in May, 25 percent involved individuals who had at least one prior encounter in the previous 12 months.

The Biden administration said those repeat encounters -- people who keep trying to get in -- inflate the overall number of illegal border-crossers.

"Since many people expelled into Mexico under Title 42 try to reenter the U.S., Title 42 has contributed to a higher-than-usual number of migrants making multiple border crossing attempts, which means that total encounters somewhat overstate the number of unique individuals arriving at the border," CBP explains.

CBP says that nationwide -- including the southwest border, northern border and coasts -- CBP encountered 177,793 "unique individuals" in May 2022, a 15 percent increase in the number of unique enforcement encounters over the prior month.

Single adults accounted for 69 percent, or 165,200, of all southwest land border encounters in May, down 2 percent from April.

(In May, the average number of unaccompanied children in CBP custody was 692 per day, compared with an average of 479 per day in April.)

“Current restrictions at the U.S. border have not changed: single adults and families encountered at the Southwest Border will continue to be expelled, where appropriate, under Title 42,” said CBP Commissioner Chris Magnus.

Title 42 is the public health measure imposed by the federal Centers for Disease Control and Prevention during the COVID pandemic. A Biden administration effort to lift the Title 42 expulsions is tied up in the courts. If and when it is eventually lifted, illegal immigrants will be detained for processing in this country instead of being immediately turned around and expelled from the United States.

In addition to those expelled under Title 42, CBP also counts "inadmissibles" in its monthly numbers. Inadmissibles (Title 8) refers to individuals who turn themselves in at ports of entry, seeking lawful admission, but whose requests are denied as well as people apprehended by border agents. There is no way to calculate how many people sneak into the country undetected any given day, week, month or year.

In May, according to CBP:

“As temperatures start to rise in the summer, human smugglers will continue to exploit vulnerable populations and recklessly endanger the lives of migrants for financial gain. The terrain along the Southwest Border is extreme, the summer heat is severe, and the miles of desert that migrants must hike after crossing the border are unforgiving. Our message to those who would try and gain illegal entry to the United States remains the same – don’t make the dangerous journey only to be sent back.”

To deal with surging illegal immigration at the southwest border, the Department of Homeland Security announced it is "surging resources" to the border and "increasing efficiencies, administering consequences, bolstering capacity of non-governmental organizations, targeting and disrupting transnational criminal organizations and smugglers, and deterring irregular migration in partnership with other agencies across the federal government and with nations throughout the hemisphere."

But as the numbers keep growing, the do-not-come message previously delivered by Vice President Kamala Harris and Homeland Security Secretary Alejandro Mayorkas is either ignored or unheard.