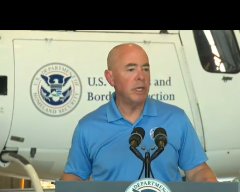 (CNSNews.com)  -  During a visit to South Texas on Tuesday, Homeland Security Secretary Alejandro Mayorkas said the department will step up criminal prosecutions of migrants “to meet the challenge” posed by what he called a “historic” level of migration.

He told reporters that while the department was preparing for the end of Title 42 on May 23, “that does not mean that the border is open beginning on May 23.”

“We’re a nation of immigrants,” he said, “and we are also a nation of laws. And we enforce the law and we will continue to do so.”

Title 42 is the authority that has allowed U.S. border officials to expel migrants and asylum-seekers quickly on public health grounds, relating to the coronavirus pandemic.

CBP Commissioner Chris Magnus predicted the number of encounters would rise once Title 42 goes, but expressed “a great degree of confidence that the dedicated men and women of CBP and our multiple agency partners will meet this challenge.”

“After many months of planning, we are executing a comprehensive strategy to safely, orderly, and humanely manage our borders,” he said in a statement.

“CBP is surging personnel and resources to the border, increasing processing capacity, securing more ground and air transportation, and increasing medical supplies, food, water, and other resources to ensure a humane environment for those being processed, screened, and vetted.”

Republican lawmakers continue to warn that an end to Title 42 will exacerbate the crisis.

“If the administration gets its way, as many as 1 million migrants could try to cross the border in the following 6 weeks – making an already historic crisis worse,” predicted Sen. Jim Inhofe (R-Okla.)

See also:
National Border Patrol Council President Predicts 230,000 Migrants Will Be Released into U.S. Next Month When Title 42 Goes Away (May 17, 2022)