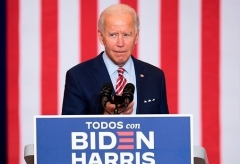 (CNSNews.com) – Democrat presidential nominee Joe Biden prefaced his remarks at a Hispanic Heritage Month campaign event in Florida on Tuesday night by playing an excerpt on his phone of the 2017 Spanish-language hit song “Despacito,” grinning and swaying to be beat as he did so.

After about 15 seconds he turned it down, and quipped, “I’ll tell you what, if I had the talent of any one of these people, I’d be – I’d be elected president by acclamation.”

“These people” was apparently a reference to the three Hispanic celebrities who preceded him at the podium in Kissimmee, Florida -- actress and activist Eva Longoria, singer Ricky Martin, and Luis Fonsi, the Puerto Rican-American singer-songwriter whose hugely successful song Biden featured in his opening.

Before introducing Biden, Fonsi in his remarks accused President Trump of “trying to divide us.”

“One song, en español, broke all the barriers across cultures, languages and ages,” Fonsi said. “Despacito proved to me that in this country we will never be defined by our differences.” 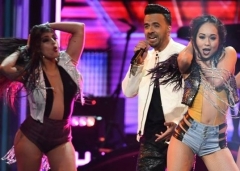 “Nothing less than the future of our country is on the ballot in November, and we cannot let nuestros familias down,” Fonsi added.

Trump campaign advisor Mercedes Schlapp was among many who drew attention to the meaning of the song’s title.

“What is this all about?” tweeted President Trump, linking to a spoof video in which Biden seemed to be playing not Despacito but the hip hop protest song ‘F**k da Police” by N.W.A.

The original video of Despacito, by Fonsi and rapper Daddy Yankee, is the most-watched clip ever on YouTube, now exceeding 6.9 billion views.

Translated into English, the lyrics include lines such as:

The song – as the video makes fairly obvious – is about sex.