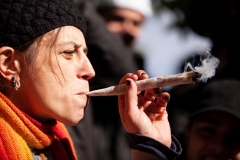 (CNS News) -- A new survey shows that 68% of American adults support legalizing marijuana, which is a sharp increase from 2013 when a majority of Americans, for the first time, supported legalizing the mind-altering substance.

Back in 1969, only 12% of Americans supported legalizing pot, said Gallup in its survey. In addition, further surveys showed that such support lingered from 23% to 34% between roughly 1985 and 2002.

"Gallup has documented increasing support for legalizing marijuana over more than five decades, with particularly sharp increases occurring in the 2000s and 2010s," reported the survey group.  "In 2013, a majority of Americans, for the first time, supported legalization."

"As was the case in 2020, solid majorities of U.S. adults in all major subgroups by gender, age, income and education support legalizing marijuana," said Gallup.

"Substantive differences are seen, however, by political party and religion," Gallup added.  "While most Democrats (83%) and political independents (71%) support legalization, Republicans are nearly evenly split on the question (50% in favor; 49% opposed)."

For the survey, Gallup interviewed a random sample of 823 adults living in all 50 states and the District of Columbia. The margin of error was +/- 4 percentage points.

In his 2018 book, Tell Your Children: The Truth About Marijuana, Mental Illness, and Violence, former New York Times reporter Alex Berenson documents that many of the major studies on marijuana show a link between heavy use of the drug and mental illness, psychosis, and violence.

As Berenson explained in a 2019 commentary for The Wall Street Journal, "As legalization spreads, more Americans are becoming heavy users of cannabis, despite its links to violence and mental illness...." There are over 8 million daily users of marijuana in the United States.

"And they are consuming cannabis that is far more potent than ever before, as measured by the amount of THC it contains," said Berenson. "THC, or delta-9-tetrahydrocannabinol, is the chemical responsible for the drug’s psychoactive effects. In the 1970s, most marijuana contained less than 2% THC. Today, marijuana routinely contains 20-25% THC...."

Berenson continued,  "What is clear is that, in individual cases, marijuana can cause psychosis, and psychosis is a high risk factor for violence.... The most obvious way that cannabis fuels violence in psychotic people is through its tendency to cause paranoia. Even marijuana advocates acknowledge that the drug can cause paranoia; the risk is so obvious that users joke about it, and dispensaries advertise certain strains as less likely to do so."

"A 2012 paper in the Journal of Interpersonal Violence, examining a federal survey of more than 9,000 adolescents, found that marijuana use was associated with a doubling of domestic violence in the U.S.," reported Berenson.  "A 2017 paper in the journal Social Psychiatry and Psychiatric Epidemiology, examining drivers of violence among 6,000 British and Chinese men, found that drug use was linked to a fivefold increase in violence, and the drug used was nearly always cannabis."