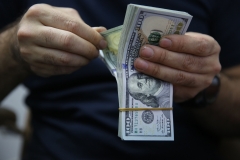 "Forty-one percent of U.S. adults now say they are better off financially than a year ago," reported Gallup on its Jan. 3-16 survey.  "That is up slightly from 35% in January 2021 but still well below the record-high 59% reporting they were better off in January 2020, right before the start of the coronavirus pandemic."

In looking ahead to next year, 60% of Americans said they will be financially better off than now. Twenty-seven percent said they would be worse off.

However, "[t]he percentage of Americans who foresee improvement in their finances has dipped (although not significantly) from last year's 63%," reported Gallup.  "Again, inflation could be a factor behind this sentiment stagnating...."

"Both the current and 2021 readings contrast with the all-time high for financial optimism," said the survey firm. "That was recorded just before the pandemic, in January 2020, when 74% expected to be better off in a year's time."

For certain annual income groups, Gallup asked, "Would you say that you are financially better off now than you were a year ago, or are you financially worse off now?

"Americans are not feeling as flush financially as they were in January 2020 when public confidence in the economy was at a 20-year high, unemployment was at a 50-year low and the stock market was soaring," said Gallup.  "After tumbling in the initial months of the pandemic, people's belief that they are better off financially than a year ago has only inched forward."

"Lower-income Americans today perceive real improvement in their finances after their assessment plunged a year ago," reported Gallup.  "These Americans may have been the most affected by the economic shutdowns in 2020 and the resulting spike in unemployment, whereas jobs are now plentiful. Middle- and upper-income Americans have grown less positive over the past year, perhaps because they are more focused on inflation."